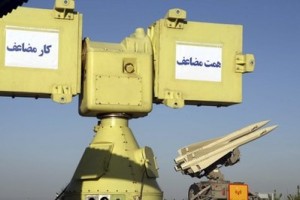 Iran unveiled what it described as a new air defense system during an annual military display Sunday as policymakers in Washington confronted new reminders about their limited range of options for responding to Tehran’s apparent arms buildup.

The new system, which Iran said is designed to defend against attacks by missiles and high-altitude planes, was introduced as the government awaits delivery of sophisticated missile defense batteries it has bought from Russia but which have been delayed because of Israeli pressure on Moscow.

Tehran’s assertion of new military advances came amid disclosures that Defense Secretary Robert M. Gates wrote to White House officials in January to warn that more options were needed to prevent Iran from acquiring nuclear weapons. U.S. officials and their allies accuse Iran of trying to develop such weapons, but Tehran says its research program is aimed solely at developing civilian nuclear energy.

The memo from Gates to White House national security advisor James L. Jones, first reported by the New York Times, decried the lack of a long-term strategy for addressing Iran’s plans. A U.S. government official confirmed the existence of the memo Sunday.

U.S. officials and analysts have long agreed that they have poor options, given that Iran has been defiant in the face of economic sanctions and that a military strike would be difficult, costly and would probably only delay Iran’s nuclear plans by a few years.

However, it is highly unusual for a senior Cabinet member to stress concerns over administration options, as Gates did in his memo.

Administration officials challenged an assertion in the New York Times that the memo prompted a reevaluation of the administration’s approach to Iran.

“It is absolutely false that any memo touched off a reassessment of our options,” said Ben Rhodes, a spokesman for the National Security Council. “This administration has been planning for all contingencies regarding Iran for many months.”

On Sunday, Gates said, “The New York Times sources who revealed my January memo to the national security advisor mischaracterized its purpose and content.”

The memo, he said in a written statement, “identified next steps in our defense planning process . . . [and] was not intended as a ‘wake up call’ or received as such by the president’s national security team.

“Rather, it presented a number of questions and proposals intended to contribute to an orderly and timely decision-making process.”

The January memo came during a period when Gates and other top officials were pushing to develop a broader range of responses to Iran’s nuclear efforts.

In December, Adm. Michael G. Mullen, chairman of the Joint Chiefs of Staff, asked the Pentagon’s Joint Staff to develop additional options, including possible military alternatives, in an effort to instill a sense of urgency in the planning process, officials said Sunday.

Those options have not been described and remain a tightly held secret.

Gates has estimated that Iran is about a year away from having enough enriched uranium for an atomic weapon. However, the Iranians would probably need two to five more years or so to develop a weapon, U.S. officials believe.

“It depends on where they are, and we do not have perfect visibility because of the closed nature of that society into where they really are,” said a military official.

The administration’s approach toward Iran has been shifting since the beginning of the year. President Obama and his senior national security aides, convinced in December that Iran was not interested in U.S. offers to negotiate, began trying to build support for a new round of U.N. Security Council sanctions.

Obama also has adjusted the U.S. nuclear approach and pushed an international nuclear agenda in hopes of increasing pressure on Iran from those quarters. The administration also has stepped up military cooperation with Iran’s Persian Gulf neighbors.

Obama has met with the Chinese and Russian leaders to seek their support for United Nations sanctions, while acknowledging that such measures are not a “magic wand.”

Obama’s critics, meanwhile, seized on the Gates memo to assail the administration’s Iran policy as inadequate.

“We do not have a coherent policy,” said Sen. John McCain (R-Ariz.) on Fox News. “We have not done anything that would in any way be viewed effective.”

McCain, who lost to Obama in the 2008 presidential race, wants to impose stiffer penalties, including a ban on sales of refined petroleum products, a step that the administration has not endorsed and that is widely opposed internationally.

In Iran, the government showed off its arsenal during annual Army Day celebrations. State media said Iran had introduced the newly created long-range S-200 system, described as a weapon “to defend large areas against aerial attacks, including those by high-speed and high-altitude aircraft,” according to the website of the state-owned Press TV.

Iran has long sought to improve its air defenses for fear of an American or Israeli attack on its nuclear facilities. Moscow continues to delay delivery of its S-300 mobile missile defense batteries, which Iran has purchased.

Iran has warned that it would respond to any such attack with counterstrikes on Israel and U.S. targets in the region. Over the weekend,Tehran paraded improved long-range missiles that could easily hit Israel, and anti-ship cruise missiles that could be used against U.S. ships in the Persian Gulf. It also unveiled new mobile tactical radar systems.LAT