by yalibnan
462
H­ow will the West’s confrontation with Iran over its nuclear program ultimately be resolved? In the infamous words of former President George W. Bush: World War III?
Share: 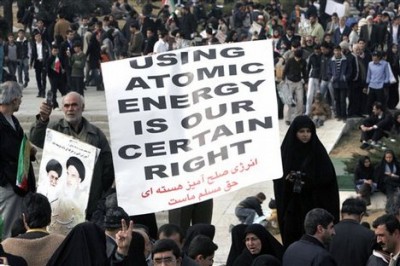 Does Iran’s nuclear program merit the ruckus it is raising?

H­ow will the West’s confrontation with Iran over its nuclear program ultimately be resolved? In the infamous words of former President George W. Bush: World War III?

Bush’s remark to this effect on Oct. 17, 2007, was jarring, but it accurately reflects the gravity of the situation. If Iran is attacked by either Israel or the US, it has vowed to retaliate with medium- and long-range missiles. US troops in Iraq and Israeli citizens would be the most vulnerable to such attacks.

Moreover, Iran has military alliances with Syria, Hezbollah in Southern Lebanon and Hamas in the Gaza Strip. If war breaks out between Iran and Israel, there is a good chance these other entities would join the fight on Iran’s side. Hezbollah, which fought Israel to a draw during a brief war in 2006, retains hundreds of missiles that can strike deep within Israel. Where all of this would end is anybody’s guess.

Obviously, cooler heads favor some kind of diplomatic solution to the standoff over Iran’s nuclear program. But it’s also fair to ask if this program really deserves the ruckus it is raising. After all, Iran continues to claim its nuclear program is for peaceful purposes, and as a signatory to the Nuclear Non-Proliferation Treaty (NPT) it does indeed have a right to peaceful nuclear development.

Let us also remember that all 16 US intelligence agencies reached a consensus in December 2007 that Iran ended its nuclear weapons program in 2003. Perhaps a new National Intelligence Estimate will reach a different conclusion, but so far this has not yet happened.

Should we not also be skeptical when those most alarmed about Iran sound a lot like the hyperventilating Bush administration officials who led us into the disastrous Iraq war over weapons of mass destruction that proved to be non-existent? Take, for example, the recently reported “secret documents” which purport to show that Iran has worked on a “neutron initiator,” a device that can serve as a trigger for an atom bomb. However, US intelligence has not yet confirmed the authenticity of these documents, which Iran says are forgeries. Some CIA officials have agreed. All of this is reminiscent of the bogus claim that Saddam was seeking yellowcake uranium in Niger.

Just how close is Iran to having a workable nuclear weapon? Its grand total of two tons of low-enriched uranium that some find so menacing is only 3.5 percent pure. To work in a nuclear weapon, uranium must be enriched to more than 90 percent. Whether Iran can make this huge leap and then assemble a reliable nuclear bomb is by no means certain and is surely not imminent.

Much has also been made of Iran’s nuclear site under construction beneath a mountain near the city of Qom. But after Israel unilaterally bombed and destroyed an above-ground nuclear reactor in Iraq in 1981, and later destroyed an above-ground nuclear reactor under construction in Syria in 2007, Iran has clearly learned a lesson from these events and is seeking to shelter its nuclear facilities from any other Israeli attacks.

So far the threat of additional UN Security Council sanctions has done nothing but stiffen Iran’s resolve to build even more nuclear plants. Furthermore, the lack of unity on the council has probably emboldened Iran, as China has consistently opposed new sanctions and current council members Brazil, Turkey and Lebanon have signaled they may fail to support new punitive measures. In any event, it’s doubtful a fourth round of sanctions would accomplish something the previous three have not.

How far can the West push Iran before it follows North Korea’s path and withdraws from the NPT? If this happened, Iran could expel the International Atomic Energy Agency (IAEA) inspectors who continue to monitor its nuclear facilities. This would be a colossal setback. As long as IAEA inspectors remain active in Iran, its ability to make mischief is severely constrained.

Finally, it’s time to deal realistically with the underlying assumption driving the whole debate about Iran’s nuclear program. That is, if Iran were to someday actually acquire a workable nuclear weapon, this would somehow constitute an “existential threat” to Israel.

Writing in the Israeli newspaper Haaretz, Dr. Avner Cohen, a public policy scholar at the Woodrow Wilson Center in Washington, recently called this perception “hysterical,” “apocalyptic” and “alarmist.” He invokes the time-honored concept of deterrence, pointing out that any Iranian attempt to destroy Israel with a nuclear weapon would surely result in the destruction of Iran itself by Israel’s sizable nuclear arsenal. According to Cohen, the powers that be in Iran understand this.

We need to take a deep breath and let reason and restraint guide us to a peaceful resolution of the “Iranian nuclear crisis.” If we fail, the possible consequences may truly be apocalyptic.

* John Grula, Ph.D., is affiliated with the Southern California Federation of Scientists