Gemayel: The day will come when Hezbollah is disarmed 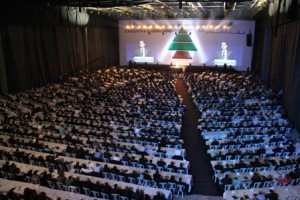 “The day will come when Hezbollah is disarmed.”

He added: “The day will come when the Airport Highway will be congested with (trucks loaded) by weapons, rockets and ammunition heading toward the defense ministry and that will be the day when Hezbuollah will hand over its weapons to the Lebanese State.”

“Hezbollah’s telecom network currently connects Lebanon to Syria and Iran, but in an illegitimate and illegal manner,” Gemayel told the gathering of over 3500 party members and officials .

“The relation with Syria must be a state-to-state relation and it should be the responsibility of the president and the premier,” Gemayel added, noting that “Lebanon’s interest lies in being on good terms with Syria, but this crawling toward Damascus is meaningless and overbidding doesn’t benefit Lebanon.”

As for the Phalange , Gemayel said the party is more organized than ever before, and denied rumors his party wants to sell its office headquarters in downtown Beirut

Former Lebanese president and Phalange Party leader Amin Gemayel reiterated his call for “best relations with Syria through achieving essential (Lebanese) demands,” encouraging “the steps of PM Saad Hariri in this regard as long as Syria responds with the Lebanese steps.”

“Security will not stabilize as long as there are groups who are protecting themselves with certain immunities and as long as there is no accountability in shadow of the existence of groups operating away from State’s decision,” Gemayel added.

“Have we decided to assign our security and national defense to outlaw groups?” Gemayel wondered.

Earlier Sunday, Gemayel said “no one wants to fight Hezbollah at the dialogue (table),” but stressed that “intimidation must stop.”

During an interview with Future News television on Saturday , Gemayel stressed that the defense strategy should be “seriously and objectively” discussed at the dialogue table, pointing out that talks at the table are better than street protests.