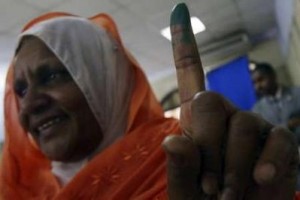 Sudanese voters flocked to polling stations on Sunday in the first multiparty election in 24 years. The three-day election came amid calls for a boycott and accusations of fraud against the ruling National Congress Party.

There was confusion at some polling centers in Southern Sudan as voters arrived to find their names were not on voter lists.

Others complained about the complicated 12 levels of voting in the forms and the lack of pictures of candidates on lists in widely illiterate communities.

In the Southern Sudan regional capital, Juba, the region’s president, Salva Kiir, arrived on time but had to wait for the voting station to open.

Kiir said it was the first time he had voted in his life and called the election a significant milestone for the country.

Voters were generally calm in the Juba area as they cast ballots and got a blue ink stain in exchange. Most stores were closed and security forces kept a watchful eye.

International leaders urged the Sudanese to exercise their right to vote without violence. Up to 750 international and 18,000 domestic observers are monitoring the election.

“The holding of peaceful and credible elections is of paramount importance,” U.N. chief Ban Ki-moon said in a statement Saturday. “The elections should contribute to the opening of political space in Sudan, ahead of the January 2011 referenda stipulated in the [Comprehensive Peace Agreement].”

Northern and Southern Sudan are currently separate territories. They have been embroiled in a decades-long conflict that formally ended in 2005 after the Comprehensive Peace Agreement. The elections were stipulated by the peace agreement as a stepping stone toward unification or separation of the North and South, which will be decided by a January 2011 referendum.

Opposition parties have called for a boycott and delays amid accusations of fraud against the ruling National Congress Party. Incumbent President Omar al-Bashir has shunned the calls and denied fraud allegations, prompting some parties to withdraw partially or fully from the election.

The main Sudan People’s Liberation Movement, which controls the South, recently withdrew its presidential candidate from the race against al-Bashir.

Last week, Susan E. Rice, the U.S. ambassador to the United Nations, said the nation’s election preparation was “quite disturbing.” Rice said the United States is concerned about government restrictions on political freedom, freedom of speech, and limitations on access to polling stations, particularly in the war-ravaged Darfur region.

The decades of conflict between the North and the South left more than 2 million people dead. It pitted Christian and animist Southerners against Muslim Northerners. The peace deal, which mandated the election and the crucial 2011 referendum, was instrumental in ending the conflict.

“If these elections do not go according to plan and if a peaceful resolution isn’t found, then I think it is very possible that we will see a return to conflict in Sudan,” said Zach Vertin of the International Crisis group.

The other conflict in the western Darfur region, which gained more international media coverage, was a different war. It was between government militias and ethnic rebels. That conflict is regarded as genocide by the U.S. government and resulted in war crimes charges against al-Bashir.

Al-Bashir seized power in a military coup in 1989 and brought in sharia, the strict Islamic code for living. The implementation of sharia created divisions between the North and South of the oil-rich nation. Analysts have said that as most of the oil is in the South, a split Sudan could negate sanctions to allow companies to prospect more easily in the South.

Photo: A Sudanese woman shows her inked finger at a polling station in the Sudanese embassy in Cairo April 11, 2010. Sudanese living in Egypt queued to vote on Sunday in the first elections for almost a quarter of a century that will test the fragile unity of Africa’s biggest country but which have already been marred by fraud allegations.