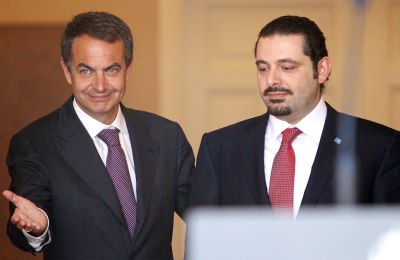 Lebanon Prime Minister Saad Hariri who is on a two-day official visit to Spain , met with his Spanish counterpart, José Luis Rodriguez Zapatero, on Thursday in Madrid following which they held a joint press conference.

Hariri told reporters that Lebanon will not be secure, unless the situation in the Middle East is stable. He added that Spain, which is the current EU leader, plays an important role in the region’s peace process. He also warned against the failure of the peace negotiations, saying it would increase the levels of extremism in the region.

Hariri stressed that Israel should “move ahead” towards finding a political solution with the Palestinians by focusing on dialogue instead of “little wars.”

“Israel must move ahead” because “we need to have a credible process that the Arab world can believe in,” Hariri said.

He accused Israel of “trying to create little wars here and there to block the peace process.”

“The Israelis have to understand that weapons and destruction only incite hate and violence,” he added.

“A political solution, with the existing consensus in Europe, the United States and the Arab world, is the only way to make progress in the region,” he said.

Hariri thanked the Spanish leadership for sending a UNIFIL contingent to South Lebanon and commended the role of the peacekeeping forces.

Zapatero, in turn, pledged his country’s support, saying Madrid will put more effort into the peace process. He reiterated that Lebanon’s national unity and national dialogue are also very important for ensuring a prosperous future.

Zapatero said that Israel’s announcement last month of plans for the construction of homes in occupied East Jerusalem was a “serious problem” that “put the brakes” on the possibility of indirect talks between the Israelis and Palestinians.

“The current moment is historic for getting an agreement because the international community and the Arab world have a very clear position and there is a wide consensus,” he stressed.