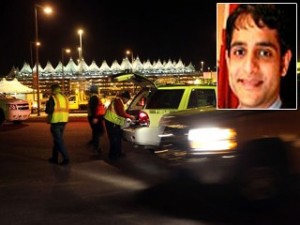 The Qatari diplomat who caused a mid-air security scare won’t face charges after claiming he was trying to light his shoes on fire when it appears he was simply smoking in the bathroom.

Federal officials said Mohammed al Modadi was on official business when he boarded United Airlines Flight 663 from Washington to Denver, giving him diplomatic immunity. A law firm spokesman told The Associated Press that al Modadi has been released and was headed back to Washington.

More than 160 passengers and crew were on board when flight attendants noticed smoke coming from the bathroom and notified federal air marshals on the plane, government sources said.

When the marshals demanded to know what he was doing, the man identified himself as a diplomat from Qatar and responded, perhaps sarcastically, “I’m trying to light my shoes on fire.”

It was a comment reminiscent of shoe bomber Richard Reid and also the so-called underwear bomber Umar Farouk Abdulmutallab, who successfully smuggled explosives onto a Christmas Day flight, but failed to detonate them.

“None of this is going to be taken as anything less than dead seriousness,” ABC News aviation analyst John Nance told “Good Morning America” today. “If you make the wrong comment at the wrong time and you’re going to come off the airplane in chains.”

Al Modadi’s comments Wednesday set off a chain reaction of security and terrorism responses, including F-16 fighter jets that scrambled from Peterson Air Force Base in Colorado to accompany the flight during its descent into Denver. The plane was met by the FBI and local law enforcement.

“If this was an overreaction, it was not only an understandable one, it was a good one,” Nance said.

Al Modadi’s shoes were examined once the flight landed, government officials said, but no traces of explosives were found.

A statement was posted on the Qatar Embassy’s Web site in response to the incident, defending al Modadi and calling it a mistake.

Photo: The Qatari diplomat who caused a mid-air security scare won’t face charges after claiming he was trying to light his shoes on fire when it appears he was simply smoking in the bathroom.