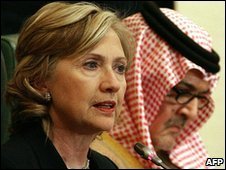 Saudi Arabia’s foreign minister has cast doubt on the usefulness of imposing more sanctions on Iran over its nuclear programme.

He was speaking in Riyadh at a joint news conference alongside US Secretary of State Hillary Clinton, who earlier said Iran was “becoming a military dictatorship”.

“They may work, we can’t judge. But we see the issue in the shorter term maybe because we are closer to the threat… So we need an immediate resolution rather than a gradual resolution.”BBC