Na’vi from the film Avatar stage a protest against Israel 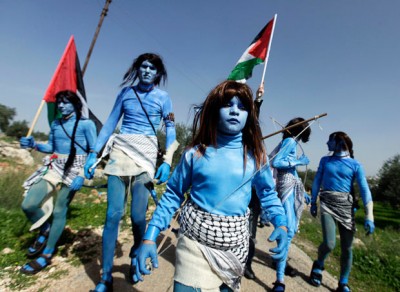 Palestinians dressed as the Na’vi from the film Avatar staged a protest against Israel’s separation barrier in the West Bank village of Bilin near Ramallah. The Palestinians dressed as Na’vi to draw attention to their campaign against the controversial Israeli barrier. Israel says the barrier is needed for security, but Palestinians consider it a land grab. Opponents of the barrier scored a long-awaited victory on Thursday when the government began rerouting the enclosure to eat up less of a Palestinian village that has become a symbol of anti-wall protests and the site of frequent clashes. Israel has started rerouting the barrier in accordance with a Supreme Court ruling two years ago that said a section of the barrier set to cut through the village’s farmland should circumvent it instead. The Independent