Only one presidential candidate to represent March 14; Geagea securing support 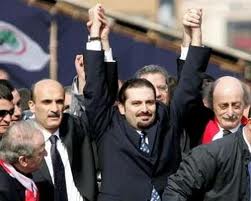 A meeting held between head of al-Mustaqbal movement leader Saad Hariri’s adviser and Lebanese Forces leader Samir Geagea following his candidacy to the presidential elections was to confirm the “strong ties” between the allies.

According to al-Joumhouria newspaper published on Monday, the two officials stressed that the March 14 alliance will run for presidency “with one candidate only.”

Nader al-Hariri and Geagea’s meeting “came at a time to stress the strong ties between the factions of the independent move and the consultations between them.”

Sources close to the LF expressed relief over the meeting.

Geagea was the first to announce his candidacy to the presidential elections last week.

“Geagea’s contacts with the March 14 allies are open in order to reach common grounds concerning the presidential polls,” the sources added.

“The battle is between two programs in the country.”

Contacts are ongoing between the March 14 Christian parties to prepare a unified stance before tackling the matter with the rest of their allies, An Nahar newspaper said.