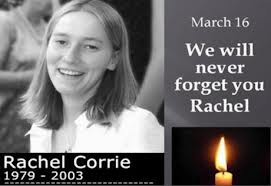 The United Nations Special Rapporteur on the situation of human rights in the occupied Palestinian territories, Richard Falk, condemned this week’s ruling by an Israeli judge blocking a civil suit filed by the family of a young American activist killed by an Israeli bulldozer in Gaza, in 2003. This is his statement:

“On 28 August, the Haifa District Court in Israel dismissed a civil damages law suit initiated by the family of Rachel Corrie, a young American peace activist, who on March 16, 2003, was killed by an Israeli armed bulldozer in the Rafah region of Gaza. Judge Oded Gershon ruled that her death was ‘a regrettable accident,’ blaming the victim for her own death because ‘any thinking person’ would have stayed away. The judge’s decision represents a defeat for justice and accountability, and a victory for impunity for the Israeli military.

Rachel Corrie was protesting the demolition of the home of the Nasrallah family in Rafah, where she had been a volunteer for the International Solidarity Movement. The court ignored the testimony of several eyewitnesses that, while non-violently protesting the demolition, Corrie was in the direct line of vision of the bulldozer driver and was wearing a bright florescent orange vest that made her clearly visible at the time of her gruesome death. Judge Gerson accepted the Israeli military’s declaration that all of southern Gaza was ‘a war zone,’ in which security concerns were paramount and in which Israeli military commanders asserted that merely by being present, persons ‘made themselves a target.’

The judge ruled that there were no grounds for imposing any penalty on Israel, exonerating both military and political officials, from those on the ground in Gaza driving the bulldozers and commanding the troops, to the highest levels of decision-making. In so doing, Judge Gershon seemed to endorse the view of a reportedly high-ranking officer who told the court that there are ‘no civilians in war.’

Such a shocking rationale flies directly in the face of the Geneva Conventions, which impose on an occupying power an unconditional obligation to protect the civilian population. Additionally, by Article 10 of the Fourth Geneva Convention a humanitarian aid worker such as Rachel Corrie is specifically entitled to protection by occupying forces, and the house demolition itself seemed an unlawful encroachment on Article 147, which prohibits targeting civilian property, in this case a home belonging to a civilian pharmacist, his wife and children.

This is a sad outcome, above all for the Corrie family that had initiated the case back in 2005, but also for the rule of law and the hope that an Israeli court would place limits on the violence of the state, particularly in relation to innocent and unarmed civilians in an occupied territory.

Israeli governmental institutions have consistently embraced impunity and non-accountability in responding to well-documented violations of international humanitarian law and in many cases Israel’s own criminal law. It is impossible to separate the outcome here from a pattern of similar results exonerating military actions and the political leaders who ordered them, in Israeli investigations of the killing of Palestinian civilians during the Operation Cast Lead attack on Gaza or the commando assault in 2010 on Turkish ships filled with activists bringing humanitarian supplies to the blockaded people of Gaza.

The Corrie family has announced their intention to appeal this verdict to the Israel Supreme Court. But it becomes a mockery of justice to leave their application to the partisan mercies of the Israeli judicial system. Even the U.S. ambassador to Israel told the Corrie family that Israel’s military investigation, which Judge Gerson had approved, was not ‘thorough, credible, and transparent.’ Has not the time finally arrived where the states parties to the Geneva Conventions should act to fulfill their duty under Article 1 ‘to respect and ensure respect’ for the obligations of the treaty ‘under all circumstances’”?