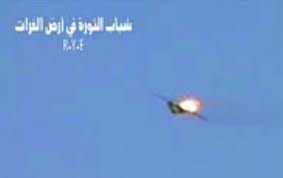 Unconfirmed reports say Syrian rebels have shot down an air force fighter jet in the north-western province of Idlib.

The reports come amid diplomatic rifts over the Syria conflict at the Non-Aligned Movement summit in Iran.

A rights group has alleged that Syrian forces may be targeting civilians queuing for bread in Aleppo.

The UN Security Council is set to meet on Thursday to discuss the humanitarian situation in Syria.

But according to reports, the US, Russia and China will be absent from the meeting of foreign ministers from council member nations, making decisive action unlikely to result.

In the footage of the apparent downing of the plane shown on al-Arabiya satellite station, smoke billows in the sky and then pilots are seen parachuting down to the ground.

The news agency AFP later quoted the head of the rebel military council in Idlib as saying the two pilots had been captured.

The identity of the rebels behind the purported attack is unclear, with the video’s narrator saying the rebels come from the Syrian Martyrs’ Brigade and al-Arabiya suggesting they are from the Free Syrian Army.

In recent weeks, the Syrian rebels say they have shot down another fighter jet and a helicopter gunship.

Meanwhile, the director of the main hospital used to treat security personnel has told AFP he estimates more than 8,000 members of the security forces have died since the Syrian uprising began in March 2011.

The director, a doctor who also holds the rank of general, works at the Tishrin facility in Damascus and spoke on condition of anonymity. His estimates cannot be independently confirmed.

“I estimate that at least 8,000 soldiers and members of the security forces have been killed since the beginning of the crisis,” the director told AFP.

“Every day, we receive an average of 15 to 20 bodies of soldiers and members of security forces, with the numbers increasing since the beginning of the year,” he was quoted as saying.

He said about 60% of victims were killed by gunfire, 35% in explosions including anti-tank rockets, while 5% were “slaughtered or beheaded”.

The UN estimates that overall, more than 18,000 people have died in the conflict since it began.

Clashes were said to be continuing elsewhere in the country on Thursday, with activists reporting pre-dawn fighting in the eastern suburbs of the capital, Damascus.

It said the attacks on or near at least 10 bakeries in the last three weeks are “recklessly indiscriminate” and “suggest that government forces have been targeting civilians” – both war crimes.