Egypt’s Morsi Pushes for End of ‘Oppressive Regime’ in Syria 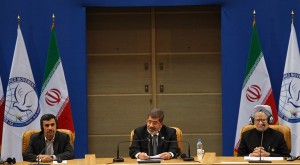 World leaders convening at Iran’s largest international conference since its 1979 revolution heard on Thursday two speeches that illustrate the deep divide between Iran and Egypt for finding a solution to the conflict in Syria.

In one of his first major addresses outside his country, Egypt’s new Islamist president, Mohamed Morsi, likened the uprising in Syria to the revolutions that swept away longtime leaders in North Africa.

“The Syrian people are fighting with courage, looking for freedom and human dignity,” Mr. Morsi said, suggesting that all parties at the gathering shared responsibility for the bloodshed. “We must all be fully aware that this will not stop unless we act.”

Mr. Morsi, pointedly, did not mention unrest in Bahrain, possibly to avoid offending Saudi Arabia, which has helped Bahrain’s monarchy suppress the uprising.

With the Iranian president, Mahmoud Ahmadinejad, sitting beside him, Mr. Morsi spoke of an “oppressive regime” in Syria and said the opposition should unite in its effort to unseat President Bashar al-Assad.

“I am here,” he said, “to announce our full and just support for a free, independent Syria that supports a transition into a democratic system and that respects the will of the Syrian people for freedom and equality at the same time, preventing Syria from going into civil war or going into sectarian divisions.”

During the speech, the Syrian foreign minister, Walid al-Moallem, walked out in protest.

In contrast to Mr. Morsi’s remarks, Iran’s supreme leader, Ayatollah Ali Khamenei, who is a staunch ally of Mr. Assad, avoided the topic entirely as he addressed the emirs, presidents and prime ministers who had gathered in Tehran for the summit meeting of the Nonaligned Movement.

The Iranian organizers of the meeting had largely ignored Syria during preparations, not putting forward a proposal for a solution but instead calling for a troika of Egypt, Venezuela and Iran to become more involved.

Iran stands isolated in the Islamic world in its support for Mr. Assad, a status that became abundantly clear when it was the only nation to oppose the expelling of Syria as a member of the Organization of Islamic Countries on Aug. 14.

Such remarks have made it increasingly complicated for more pragmatic Iranian politicians to offer alternative ideas when it comes to Syria, with state television stressing daily the line of no compromise on Iran’s support for Mr. Assad.

Mr. Morsi, the new leader of an Egypt re-emerging as a regional player, and Ayatollah Khamenei, as the head of the Middle East’s only Islamic republic, predicted the coming of a new world order in which the power of the West is fading as developing countries demand more influence. The revolutions in the region are a clear sign of more changes to come, they said.

In their separate speeches, Mr. Morsi and Ayatollah Khamenei both said that the makeup of the United Nations Security Council, in which the five permanent members — the United States, Russia, China, France and Britain — can veto decisions, should be reformed.

“We need comprehensive changes so that the Security Council will be more representative of the 21st century,” Mr. Morsi said in Arabic, speaking through a translator.

Ayatollah Khamenei, who repeatedly lashed out against the United States, said the composition of the Security Council had led to a “flagrant form of dictatorship,” and he accused Washington of abusing “this mechanism in order to impose its will on the world.”

Both leaders called for a nuclear-free zone in the Middle East. Ayatollah Khamenei said that the United States and its Western allies had “equipped the usurper Zionist regime with nuclear weapons, which now pose a great threat to all of us.”

They also called for an independent Palestinian seat in the United Nations.

Ban Ki-moon, making his first visit to Iran as United Nations secretary general, called upon Iran to comply with a set of five Security Council resolutions demanding that the country stop enriching uranium. But on Thursday, Ayatollah Khamenei made clear that Iran would never compromise on the nuclear issue.

“The Islamic Republic is not after nuclear weapons,” Ayatollah Khamenei said. “But we will never give up on our right to nuclear energy.”

After arriving on Wednesday, Mr. Ban met with four members of Iran’s hierarchy, including Ayatollah Khamenei, in sessions that Mr. Ban’s spokesman described as “very serious meetings” that addressed the disputed Iranian nuclear program, the Syria conflict, human rights problems and what he called the leadership’s objectionable comments about Israel.

Iran’s state news media, which have described Mr. Ban’s visit as a repudiation of American and Israeli efforts to isolate Iran, also reported on the meetings but framed them differently, focusing on Mr. Ban’s gratitude for the invitation, their shared goal of resolving the Syrian conflict and Iran’s complaints about big-power meddling in Syria — a reference to efforts by the United States and its allies to topple Mr. Assad, a strategic ally of Iran.

There was no mention in Iranian accounts of Mr. Ban’s criticism of Iran’s human rights record or the comments about Israel by Ayatollah Khamenei, President Ahmadinejad and others, who refer to Israel as the Zionist entity and have described it as a cancerous tumor that should be eradicated.

The competing accounts of Mr. Ban’s visit came on the first day of a three-day visit to the Nonaligned Movement’s annual meeting, which Iran is hosting as president until 2015 under a three-year rotation system in the 120-member group, the biggest single bloc in the 193-member General Assembly. Mr. Ban decided to attend despite calls by the United States and Israel to boycott it because of Iran’s role.

Mr. Ban’s exact itinerary has not been disclosed, and confusion quickly arose upon his arrival over whether, and when, he would speak to the foreign news media here. Iranian officials said he would hold a news conference before he departed on Friday.

Among those in Mr. Ban’s entourage who met with Ayatollah Khamenei was Jeffery D. Feltman, an American former ambassador who now works for the United Nations, pictures of the meeting released by the semiofficial Fars News Agency showed.

Mr. Ban expressed regret that little progress had been achieved since the talks resumed in April, and told his hosts that Iran “needed to take concrete steps and prove to the world its nuclear program is for peaceful purposes,” Mr. Nesirky said. Iran has denied Western and Israeli accusations that its uranium enrichment program is a cover to develop nuclear weapons.

On Syria, Mr. Nesirky said, the secretary general expressed opposition to further militarization of the conflict and asked Iranian leaders to use their influence to halt the violence there. He declined to specify whether Mr. Ban had reiterated in private his public demand that Mr. Assad resign.

Ayatollah Khamenei told Mr. Ban that “Iran will not spare any effort to resolve the Syrian crisis,” Iran state radio reported, but added that “solving the Syrian problem has a condition, and that is to prevent the export of weapons to irresponsible groups inside Syria.”

Mr. Nesirky said the secretary general told Mr. Ahmadinejad that “the human rights situation in Iran remains a source of concern. Fundamental civil and political rights should be respected.” And in his meetings with the president and supreme leader, the spokesman said, Mr. Ban “strongly objected to recent remarks from Iranian officials denying the Holocaust and Israel’s right to exist. Such remarks should be condemned by all.”