Syria walks out during Egypt president speech in Tehran 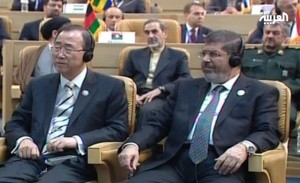 The Syrian delegation at a Non-Aligned Movement  (NAM) summit walked out during a speech on Thursday by Egyptian President Mohamed Mursi, who described the Syrian government as “oppressive”, Al Jazeera television reported.

The Arabic satellite channel did not give further details in its brief headline and it was not immediately clear if the delegation returned after Mursi’s speech finished.

Mursi hailed “brave” Syrians and Palestinians for their struggle against oppression during his speech at the summit in Tehran on Thursday.

Contrary to Iran’s Supreme Leader Ayatollah Ali Khamenei, who ignored the Syrian conflict in his opening speech, Mursi said that Egypt is “ready” to aid and help the Syrian revolution.

He said that the Syrian regime of President Bashar al-Assad has lost legitimacy and the international community must work to stop the bloodshed in the country.

“Our solidarity with the struggle of the Syrian people against an oppressive regime that has lost its legitimacy is an ethical duty as it is a political and strategic necessity,” he said.