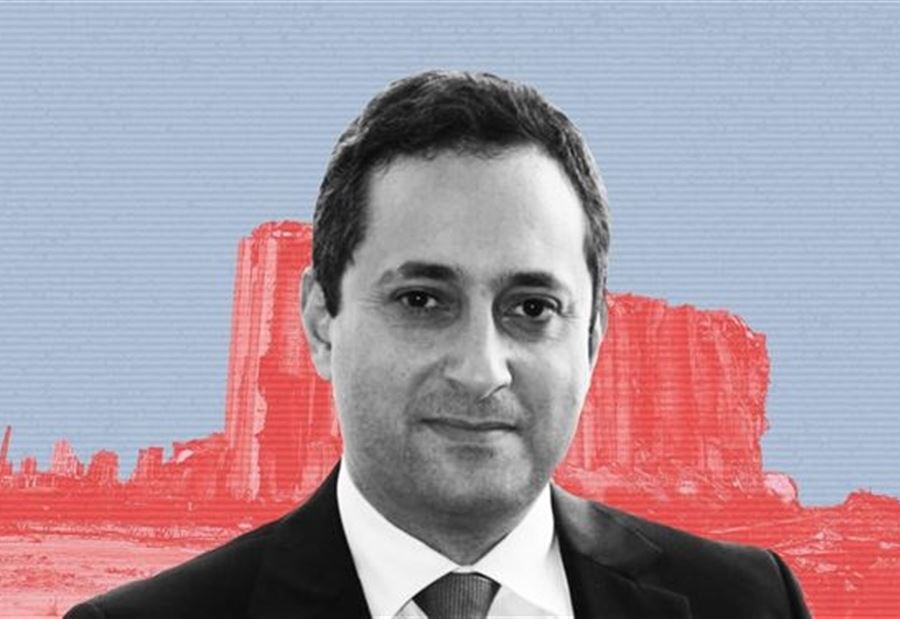 Judge Tarek Bitar was appointed lead investigator into the Beirut Port blast ( background ) after the removal of his predecessor Judge Fadi Sawwan in February, 2021 . The background of Bitar’s picture shows the huge silos of Beirut Port that exploded on Aug 4 , 2020, killing some 245 people , injured about 7000 and left 300, 000 homeless after 2,750 Tons of Ammonium Nitrate Exploded . They were stored there for nearly 7 years. , reportedly for use by the Syrian regime in its barrel bombs against the civilians in Syria. Former President Michel Aoun and former PM Hassan Diab were informed about the explosive chemical 2 weeks before the explosion. but did nothing about it . Hezbollah and its allies successfully blocked the investigation and campaigned for months to get the courageous judge fired from his position like they did to his predecessor . The Lebanese government , the presidency and the parliament leadership are all controlled by Hezbollah . The Iran backed group is reportedly concerned over being
Share:

By daring to charge powerful figures in the case of the devastating 2020 Beirut port blast this week, Lebanese judge Tarek Bitar has crossed all red lines and openly challenged an entrenched ruling elite.

Bitar decided to resume his investigation after a slew of lawsuits, mostly from politicians charged in the case, forced him to stop work for 13 months.

The daring judge made Lebanese history Monday when he charged the country’s public prosecutor.

The prosecution service quickly pushed back, and on Tuesday rejected the resumption of the probe and new charges against some of the country’s most powerful security and judicial officials.

But Bitar has refused to back down.

For part of the establishment and its supporters, Bitar is politically biased and the biggest threat to the status quo since a wave of protests against the ruling class in 2019.

To some of those seeking truth and justice after the deadly port blast, the 47-year-old is a white knight fighting a desperate and lonely battle against a corrupt and criminal elite.

But for the relatives of more than 215 people who were killed when a huge consignment of haphazardly stored fertilizer exploded on August 4, 2020, Bitar is the only hope.

“He is courageous and dared to challenge the very authorities that have been impeding the investigation for two and a half years,” Cecile Roukoz, who lost her brother during the blast, told AFP.

Bitar has rocked the boat by summoning top politicians from a range of political parties for questioning, and even going as far as issuing an arrest warrant when one failed to show up.

Throughout his investigation, he has taken on some of Lebanon’s untouchable political barons, angering most of the country’s ruling elite — including the powerful Iran-backed Hezbollah, which has called for his dismissal.

In October 2021, Hezbollah and its ally Amal called for demonstrations to demand Bitar’s dismissal and seven people died in armed clashes that erupted during the rally.

He has been under military protection since he began his thorny investigation.

“He knows he is under threat, but he isn’t scared,” Roukoz said. “He is one of the judges who refuse to submit to politicians.”

The man handling the biggest case since former prime minister Rafik Hariri’s 2005 assassination is a little known figure, who rarely talks to the press or even appears in public.

Hezbollah has accused Bitar of political bias and Washington of “interference” in the investigation.

But the judge’s supporters say he is independent, and has managed to position himself outside a political system of patronage under which parties bank on sectarian allegiance to get their way.

“He has no known political affiliation,” said a person close to him, who agreed to speak on the condition of anonymity.

“That’s why politicians have a problem with Bitar — they have no means to pressure him.”

The politicians he is pursuing accuse him of being outspoken about the fact that the time has come to change the political class.

Throughout his career, the Christian judge from the north of Lebanon has managed to forge himself a reputation as an “upright and incorruptible” member of the judiciary, even to his detractors.

Confident, some say to the point of arrogance, he keeps to himself.

“When he was named to lead the investigation, people struggled to find a picture of him,” the person close to the judge said.

A stern character who is dedicated to his mission, he is rarely seen smiling.

He declines invitations to dinner, receptions and all other social occasions for fear of being perceived as being swayed one way or the other.

“He doesn’t even accept phone calls from people who want to ask him for a favor,” they said.

Even some of his colleagues eye this “strange phenomenon” of a judge with suspicion, and claim a more experienced one should have been appointed for such a sensitive probe.

“People are disturbed by his audacity. He’s something no one has seen before at the Palace of Justice,” the same source said.

He lives with his wife, a pharmacist, and their two children, who are now guarded by soldiers.

After graduating with a degree in law from the Lebanese University, he started his career in north Lebanon, where he established himself as an independent magistrate, before going on to head the Beirut Criminal Court.