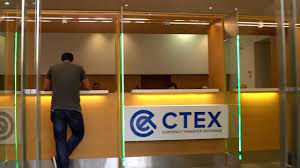 File photo of Hassan Moukalled ‘s money exchange business . The U.S. Treasury sanctioned Lebanese Moukalled and and his CTEX business for alleged financial ties to the Iran backed Hezbollah which is listed as a terrorist organization by the US and many Arab and western countries
Share:

The U.S. Treasury said on Tuesday it was placing sanctions on Lebanese money exchanger Hassan Moukalled and his business for alleged financial ties to blacklisted group Hezbollah.

Its announcement said Moukalled was a financial adviser to the Iranian-backed Hezbollah, which is also designated by the United States, and carried out financial transactions on its behalf that earned him hundreds of thousands of dollars.

“Today, the Treasury Department is taking action against a corrupt money exchanger, whose financial engineering actively supports and enables Hezbollah and its interests at the expense of the Lebanese people and economy,” Treasury Under Secretary for Terrorism Brian E. Nelson said.

It also sanctioned Moukalled’s two sons, saying they were involved in the same financial dealings.

Moukalled regularly appears on Lebanese television channels as a financial expert and has more than 50,000 followers on Twitter, making him one of the rare public-facing figures sanctioned by Washington for financial links to Hezbollah.

Founded in 1982 by Iran’s Revolutionary Guards and classified by the United States and other Western countries as a “terrorist organization,” Hezbollah is a heavily-armed and politically powerful faction.

The US Treasury regularly issues sanctions against alleged members of Hezbollah’s financial networks, most recently in December.