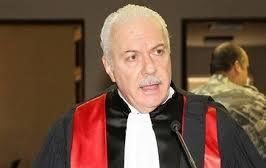 Judge Tarek Bitar who is the chief investigator of the Beirut port explosion has charged Prosecutor-General Ghassan Oueidat ( pictured) and several other judges and top officials with “homicide, arson and sabotage”
Share:

The prosecution service, however, quickly pushed back, rejecting the resumption of the probe.

Bitar decided Monday to resume his probe into the devastating August 2020 explosion despite strong political pressure that had led to a suspension of his work for more than a year.

On Tuesday, he charged eight more figures, including Lebanon’s top prosecutor Oueidat and the three judges, with “homicide, arson and sabotage”, said the judicial official who spoke to AFP on condition of anonymity.

One of history’s biggest non-nuclear explosions destroyed most of Beirut port and surrounding areas on August 4, 2020, killing more than 245 people and injuring over 7000.

The blast was caused by a fire in a warehouse where a vast stockpile of the industrial chemical ammonium nitrate had been haphazardly stored for years, authorities said.

According to the judicial official, Oueidat had in 2019 overseen a security services investigation into cracks in the warehouse where the ammonium nitrate was stored.

In total, Bitar plans to question 13 suspects next month, including five officials whom Bitar indicted earlier — among them ex-prime minister Hassan Diab and former ministers.

On Tuesday, Bitar scheduled interrogation sessions for Diab and former ministers Ghazi Zoaiter and Nohad Mashnouq, sending notices to their places of residence.

Oueidat rejected the charges against him and other top judicial officials and sent a memo to Bitar telling him that he could not return to work and that his probe is “still suspended as per the law.”

He will also send cables to security agencies asking them not to enforce the notices and release orders issued by Bitar, deeming them illegal, TV networks said.

Claims surfaced Tuesday that Oueidat will press charges against Bitar, but he told The Associated Press that this is “as of now, incorrect.”

Reopening the case Monday after a 13-month suspension, Bitar charged an initial eight suspects and released five others.