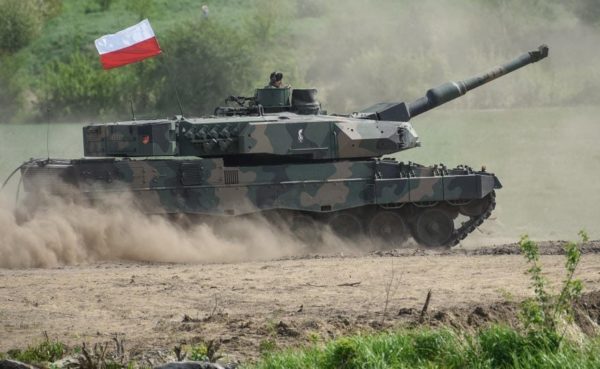 In an important reversal, the German government this weekend signaled it wouldn’t try to stop the government of Poland from supplying German-built Leopard 2 tanks to the Ukrainian army.

The go-ahead for a Leopard 2 transfer, uttered on French television by German foreign minister Annalena Baerbock, could free up other NATO countries to donate their own surplus Leopard 2s. There are hundreds of the powerful tanks in storage across Europe.

But Poland could go it alone and still satisfy Ukraine’s request for a whole brigade with at least 100 Leopard 2 tanks. That’s because, at the moment, Poland is one of the world’s top buyers of new tanks.

With more than a thousand of the latest American and South Korean tanks scheduled to arrive in Poland over the next decade, the roughly 250 Leopard 2s in the Polish army’s inventory soon should be excess to need. Poland could start giving them away right now and suffer, at worst, a fleeting capability gap.

The Ukrainian army has wanted Leopard 2s for the better part of a year, but Ukraine’s foreign allies prioritized providing the Ukrainians first with artillery and air-defenses, then with armored personnel carriers and infantry fighting vehicles.

Germany holds the export license for the Leopard 2, and the country’s reluctance to provide explicitly offensive weaponry to Ukraine was an obstacle to a big effort by NATO to re-equip the Ukrainian army’s four tank brigades and dozens of tank battalions.

The United Kingdom and Poland challenged Germany’s recalcitrance earlier this month, when the two countries respectively offered Ukraine around a dozen each of their Challenger 2 and Leopard 2 tanks.

The Challenger 2 is made in the United Kingdom, so its export license isn’t a problem. But there are only around 400 Challenger 2s in existence—and 150 of them belong to the British Army’s depleted tank regiments.

If Ukraine were to begin re-arming its tank corps, realistically it would need Leopard 2s. Finland, Spain, Denmark and The Netherlands also have signaled their willingness to donate surplus Leopard 2s to Ukraine. Many of the same countries presumably would offer up ammunition, spare parts and technical and training assistance in order to form and sustain a Ukrainian Leopard 2 brigade.

Thus Poland’s January offer represented a turning point. The Leopard 2 with its 120-millimeter gun, thick armor and 45-mile-per-hour top speed is one of the best and most balanced tanks in the world. A Ukrainian brigade equipped with Leopard 2s and NATO-style fighting vehicles and artillery should be more than a match for even the best Russian tank brigade—and could spearhead a fresh Ukrainian counteroffensive in 2023.

And now it’s all but certain that, in coming months, the Ukrainian army will be able to stand up its Leopard 2 brigade. Even if every other potential Leopard 2 donor besides Poland ends up demuring.

Poland already has pledged a dozen or so Leopard 2s to Ukraine and easily could pledge another hundred—or more. And the donations barely would make a dent in the Polish army’s tank holdings.

Two years ago the Polish armor corps, which provides tanks and crews to four tank brigades and six mechanized brigades, possessed around 250 Leopard 2s in several variants as well as 230 or so locally-made PT-91 tanks and some 320 ex-Soviet T-72s. The PT-91 itself is an upgraded T-72.

That’s 800 tanks. As Russia grew more aggressive in the years leading up to its wider invasion of Ukraine starting last February, Poland launched one of the most intensive tank-acquisition efforts in modern history.

First, it began updating its Leopard 2s. Then it dropped a staggering $4.7 billion on 250 of the latest American M-1A2 SEPv3 tanks, with large-scale deliveries commencing in early 2025.

Finally, late last year, Polish officials went on a shopping spree in South Korea, where local industry produces a tank called the K-2 that’s widely considered the equal of the Leopard 2 and M-1.

The Poles paid $5.8 billion for a thousand K-2s plus some of South Korea’s top-of-the-line K-9 howitzers and FA-50 light fighter jets. The first 180 K-2s will come from South Korean factories; Polish plants will build the other 820 starting in 2026.

“We just took our suitcases with money and [are] going like Hell around the world and trying to buy,” Gen. Rajmund Andrzejczak, chief of staff of the Polish armed forces, toldBreaking Defense. “We know the strategic objective is [to] support Ukraine.”

The huge tank buys have freed up the Polish army to begin donating its older tanks. The T-72s went to Ukraine first, back in the spring. PT-91s followed over the summer. The Leopard 2 pledge boosted to around 275 the number of Polish tanks destined for Ukrainian service.

But with 1,250 of the world’s newest tanks on their way to Poland from the United States and South Korea—that’s 450 more tanks than Poland had just two years ago—all of Poland’s older tanks arguably are on the verge of being redundant. That’s 240 or so Leopard 2s and around 280 PT-91s and T-72s.

The first few M-1A2s and K-2s already are in Poland, helping Polish crews train on the new tanks. Hundreds more will arrive over the next few years, with a huge increase in deliveries once Poland’s K-2 assembly line stands up in 2026.

Poland over the next couple of years could start giving away all of its older tanks—a hundred here, a hundred there—and suffer only a slight and temporary dip in its overall armor inventory. Even without its older Leopard 2s and Soviet-style tanks, by the end of the decade the Polish army will have one of the biggest and best tank forces in Europe.

All that is to say, Germany hasn’t just given Poland permission to send a dozen Leopard 2s to Ukraine. It may have signed off on a Polish-led, NATO effort that ultimately could send hundreds of tanks to Ukraine.