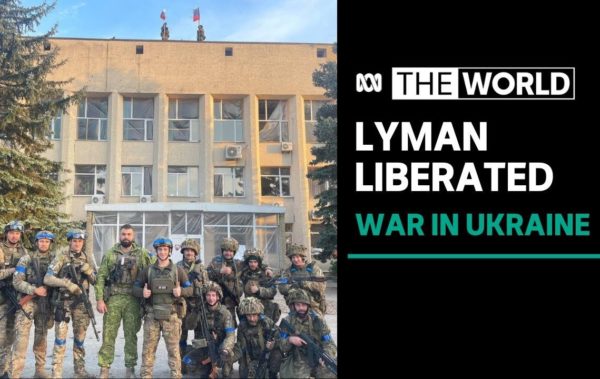 Two Ukrainian fighter jets roar low overhead as we emerge from a dense, snow-bound forest and drive into the railway junction town of Lyman, in the Donbas region of eastern Ukraine.

It is nearly four months since Russian troops were forced to retreat from here, pushed back some 25km (about 15 miles) to the east. But the boom of artillery fire, close to the front lines, is still audible every few minutes, and this town – much of it in ruins – is not yet safe from Russian missiles.

“I live on the seventh floor. The rocket hit the fifth floor, early this morning, at around five. But I’m fine,” says Alexander Rogovitz, a 73-year-old retired businessman and the only remaining resident of a large apartment block on the edge of town.

He bends over to share out some dried food to the eight cats – seven of them strays, abandoned by neighbours – he now looks after.

That resilience, and a strong collective spirit, seem to be widespread here, among those who have clung on amid the snow and rubble.

In a nearby courtyard, beside a giant bomb crater, a 45-year-old railway technician named Valeri Dmitrenko is busy chopping wood to heat the basement where he and 21 neighbours have been sheltering for the past nine months. Lyman still has no running water or central heating system, and the daytime temperature has been hovering around freezing.

“What can we do?” Valeri shrugs, stroking the head of a stray dog he and his wife, Ira, recently adopted and named Princess Diana. When he’s not busy with his axe, Valeri helps neighbours repair broken doors and windows in their badly damaged apartment building.

Ira walks past, hurriedly, with buckets of water she has pumped from a well in the yard.

“I still find it stressful to stay outside, in the open, for long,” says Ira, a 41-year-old accountant, before heading down a dark flight of stairs and into the cramped cellar of 6 Railway Street.

Despite heavy fighting continuing in the Donbas, civilians are trickling back to liberated Ukrainian towns close to the front line – against the advice of local authorities. In Lyman, devastated by Russian forces last year, some 13,000 residents are living, precariously, in gruelling winter conditions.

As Russia’s forces approached Lyman last June, 41,000 civilians fled, leaving about 10,000 people behind. Many of those were elderly, or poor – or, like Ira and Valeri, had sick relatives who refused to leave. For the next four months, about 60 people squeezed into the same cellar on Railway Street.

“It was difficult at times. People are different. Some became aggressive – we’re not used to living all together like this,” says Ira. Adding to that stress was the fact that, by Ira’s reckoning, about a third of those who had chosen to stay in the cellar were pro-Russian, actively hoping that Ukraine would lose the war.

“Yes, there were people who supported Russia. But they left when Ukraine started liberating territory. When the so-called Russian authorities moved out, they went with them, taking their children. Probably because they were scared of what would happen to them here,” adds Ira.

On 3 October, Lyman was liberated by Ukrainian forces and soon afterwards the town’s mayor, Alexander Zhuravlov, returned to discover that “80%, maybe 90%” of the buildings had been damaged or destroyed. The railway lines that pass through the centre of town are still a mass of broken overhead cables and blocked tracks.

In recent months, the mayor and his team have managed to restore electricity to most of the town and the surrounding villages. Pensions are now being paid, on time, and some shops have reopened.

The government and humanitarian groups have brought in wood stoves and distributed logs. Every day one aid group brings in hundreds of packed lunches to distribute free of charge. There are roughly 700 children living in Lyman and the mayor estimates that another 3,000 residents have returned since the town was liberated. But he’s urging the rest to stay away.

“At the moment we do not recommend people to return here. On the contrary, they’re better off in safer places and cities. There are no comfortable living places here, for now. People will be accepted in other regions and will be provided with accommodation and food,” he says, driving to the site of a two-week-old missile attack that ripped the entire wall off a nine-storey apartment block.

The mayor says local police are still dealing with “a handful” of Lyman’s residents suspected of working for the Russian occupiers. But he believes the experience of the past year has persuaded many pro-Russian residents to change their views.

“I think those people now understand that they made a mistake. They were led astray by the media – watching Russian propaganda on television every night and thinking it was the truth. They were in a minority, and they have already changed their minds. They see that this Russian world is not the one they’d been led to expect,” says Zhuravlyov.

Aid groups provide food, which is distributed free of charge, to those in need in Lyman

A 62-year-old woman called Valentina, queueing for food at the local hospital, seems to reflect that change of heart, when asked about the security situation in Lyman since it was liberated. In recent months, pro-Russian civilians have often hinted at their allegiance by implying that both sides are equally guilty of shelling towns, and that it is therefore impossible to assign blame.

“The bombardment hasn’t stopped. The shells still hit the town. We don’t know who is firing,” she begins.

But then, unprompted, Valentina changes her mind.

“I suppose it must be the Russians. Yes, no doubt,” she says, adding: “We’re Ukrainians. This is a Ukrainian town. The shops are open. Our pensions come on time. The state has not abandoned us.”