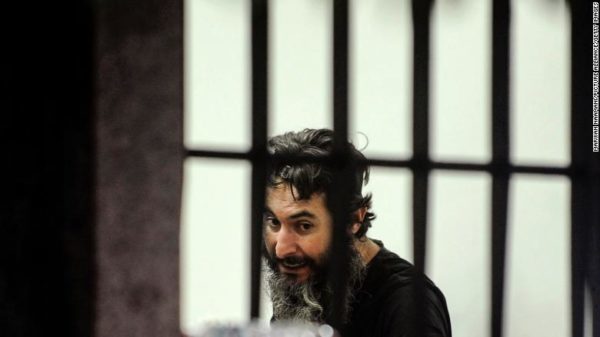 Bassam-al-Sheikh-Hussein-, an armed depositor is seen behind the iron bars of a local bank in Beirut after he stormed the branch demanded access to his bank account and held employees and customers as hostages last August
Share:

The Lebanese Central bank Banque du Liban issued a revision of article No. 13221 which deals with withdrawals of funds from the Lebanese banks

“the text of Article 1 of Basic Decision No. 13221 is is replaced with the following text: while preserving the concept of Basic Decision No. 13217 of 04/09/2020, and in the event that any depositor requests to make any withdrawals or funds in cash from Banks operating in Lebanon, subject to the approval of the concerned depositor , must pay the equivalent of their value in Lebanese pounds, according to the price of 15,000 Lebanese pounds for one US dollar, within the established ceiling 1,600 dollars per month.”

Article 2 stated that “this decision shall be implemented as of February 1, 2023.”

This decision represents a haircut of 68 % for depositors.

Lebanon’s currency, which was valued at about 1,500 to the dollar in 2019 hit a new low, Thursday trading at 50,000 to the dollar, as the country’s deeply divided Parliament failed to elect a president for the eleventh time The financial crisis has plunged 85% of the population into poverty, with millions struggling to cope with some of the world’s sharpest inflation. Experts blame the country’s entrenched ruling elites for decades of corruption and financial mismanagement.

The pound’s plunge comes days after a European judicial delegation from France, Germany, and Luxembourg came to Beirut to interrogate embattled Central Bank governor, Riad Salameh, and a dozen other people, some of them his close associates, in a European money laundering investigation of some $330 million. They have so far questioned banking officials and former central bank officials. Switzerland and Liechtenstein have also opened probes against Salameh on money laundering allegations.