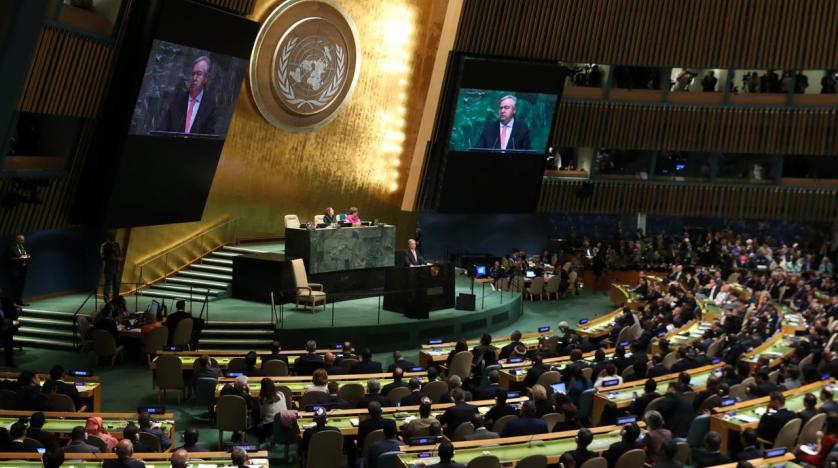 File photo :This is not the first time that Lebanon loses its right to vote in the General assembly. Back in 2020 , a war of blames emerged between the Foreign, Finance Ministries after Lebanon Lost its UN General Assembly Vote. The foreign ministry argued that it had “performed all of its duties and completed all transactions within the deadline.”The finance ministry hit back saying it did not receive any request to make the payment. Jan 12, 2020
Share:

Lebanon vowed to restore its payments to the UN’s operating budget on Friday after losing its right to vote in the 193-member UN General Assembly, according to Lebanon’s National News Agency (NNA).

Lebanon is one of six countries to lose its right to vote for not meeting minimum contributions, along with Venezuela, South Sudan, Gabon, Dominica and Equatorial Guinea, UN Secretary General Antonio Guterres said in a letter on Thursday.

In response to the suspension, Lebanon’s Foreign Ministry said on Friday that the payment process “will take place immediately,” NNA said.

“The Ministry of Foreign Affairs and Emigrants would like to clarify that all the payment stages of the required amount have been completed,” the ministry said in a statement, according to NNA.

“After the necessary contacts with the Lebanese Prime Minister and Minister of Finance, it has been confirmed that the final payment process will take place immediately in a manner that preserves Lebanon’s rights in the United Nations.”

Under Article 19 of the UN Charter, members with arrears that equal or exceed the amount of their contributions for the preceding two full years lose their voting rights. The General Assembly also has the authority to decide “if failure to pay is due to conditions beyond the control of the Member,” in which case the country will not lose its voting rights.

The minimum payments needed to restore voting rights for Lebanon is $1,835,303, the secretary general’s letter said.

For more than three years, Lebanon has seen “the most devastating, multi-pronged crisis in its modern history,” as described by the World Bank.

In a report on Lebanon, the International Monetary Fund (IMF) described the situation in the country as the “deepest economic crisis since the end of the civil war.”

The unfolding financial crisis that started in October 2019 was worsened by the impact of the Covid-19 outbreak, and the massive Port of Beirut explosion in August 2020.

Lebanon’s banks have locked most depositors out of their savings since the economic crisis, leaving much of the population unable to pay for basics and forcing depositors to hold up banks demanding access to their funds.

The Lebanese lira on Thursday hit a new record low of 50,000 to 1 US dollar, currency exchange dealers told Reuters, marking a loss in value of more than 95% since the country’s financial system imploded in 2019.

Around 2 million people in Lebanon, including 1.29 million Lebanese residents and 700,000 Syrian refugees, are currently facing food insecurity, the Food and Agriculture Organization (FAO) and World Food Program said in a report on Thursday, stating that the “situation is expected to worsen in the coming months.”

In the midst of the financial crisis, a political deadlock has prevented parliament from electing a president for the country. On Thursday, it failed to do so for the eleventh consecutive time. Several members of parliament staged a sit-in to pressure other factions to reach a consensus on the vote.

“We are insisting on the need to elect a president for the republic… and accordingly we started this sit-in inside the parliament… to voice our need to have a president capable of putting an end to the collapse of the country!” said Najat Saliba, a member of parliament who took part in Thursday’s sit-in.

Other countries that lost their voting rights

In addition to Lebanon, Venezuela and South Sudan are in arrears on paying dues to the United Nations’ operating budget and are among six nations that have lost their voting rights in the 193-member General Assembly, the U.N. chief said in a letter circulated Thursday.