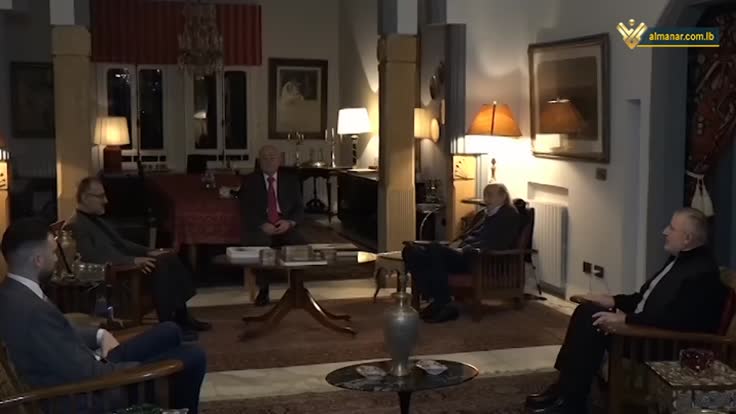 Nidaa al-Watan the daily that reported about the meeting said the conferees “continued the discussions over the questions and concerns that Jumblatt had raised with the delegation during the first Clemenceau meeting that was held on the eve of the border demarcation with Israel.”

The daily quoted informed sources as saying that Hezbollah is seeking “calm and dialogue” with Jumblatt to “explore rapprochement possibilities and strengthen the points of agreement between the two sides over the the presidential election.”

Jumblatt reportedly is “showing openness snd engaging in consultations with everyone in a bid to break the deadlock that is destructive for Lebanon and all Lebanese,” the sources added.

Jumblatt’s al-Anbaa newspaper reported that the two parties discussed “the available means to exit the presidential election impasse,” adding that Jumblatt emphasized that the country “can no longer afford the presidential vacuum amid the explosive factors that are undermining all of life’s social and economic requirements.”

On the other hand Al Jadeed TV reported that during his meeting with Hezbollah, Jumblatt, presented an initiative to take a step back and search for a consensual president. Jumblatt reportedly proposed in his meeting with the party three presidential names, namely Jihad Azour , Salah. Hnein and the army chief General Joseph Aoun.

Al Jadeed pointed out that “Hezbollah did not accept or reject Jumblatt’s initiative, and the latter agreed with the party that the two largest Christian blocs ( The Lebanese Forces and FPM ) cannot be excluded from naming the president,”

According to observers Hezbollah is repeating the same Scenario as in 2016 when it insisted on the election of its ally FPM founder Michel Aoun as the president .

Many see Franjieh as Aoun #2

FPM ‘s chief is dead against the election of Franjieh or Army chief General Joseph Aoun and for this reason Hezbollah cannot count on FPM to vote for Franjieh .

The meeting raised concerns within the anti-Hezbollah camp that Jumblatt may be flip-flopping again as he did in 2009 when he quit the March 14 alliance which led to its collapse, and in 2022 when he voted for Nabih Berri as the speaker , despite the fact that he has been in that past for 30 years.

Samir Ashkar a Lebanese observer told me : ” Everyone knows that Jumblatt is short on principles but if he ends up supporting Franjieh’s election he has no one else to blame but himself .

“After all the Druze community which he leads will never forget May 8, 2008 when Hezbollah tried but failed to occupy the Druze stronghold of Mount Lebanon . More Hezbollah militants were reportedly killed in that invasion than during Hezbollah’s 2006 war with Israel, “Mr Ashkar stressed.

The government has struggled to address the country’s problems. Additionally, the ongoing conflict in Syria has placed a strain on Lebanon’s resources and infrastructure, and has contributed to the displacement of millions of Syrians into the country. These developments do point to many more potential problems ahead,

Lebanon’s interior minister declared today that half the population in Lebanon is now made up of Syrian refugees.

Aoun and his political team have failed to accomplish any significant reforms, “despite having the largest parliamentary and ministerial blocs,” another analyst told me.

For these reasons Lebanon needs a capable , independent and sovereign president that will be able reclaim the country that used to be called the Switzerland of the East and not a president like Franjieh , who will be a rubber stamp like Aoun before him to Hezbollah’s Nasrallaah who openly and without any reservations declared his allegiance to the rulers of Iran and proclaimed that he is a soldier in Iran’s Wilayat al Faqih

Since the beginning of the 21st century, Iran has exploited elections in Iraq and Lebanon to control their parliaments and the top posts , with support from pro-Iranian militias , like Hezbollah in Lebanon and the Popular Mobilization Forces (PMF) in Iraq , this has enabled Tehran’s theocratic rulers to drive politics in both nations.

But Iran’s allies in these countries failed to gain majorities in the two most recent parliamentary elections, threatening Tehran’s hegemony in Baghdad and Beirut.

The election in Iraq took place in October 2021. The vote in Lebanon, happened in May 2022.

Like Iraq Lebanon has been witnessing for years the same problems in electing its top officials .

Let’s all hope that Jumblatt will follow in his father’s footsteps and not sell his country short.

The late Kamal Jumblatt , was one of the most prominent and patriotic national leaders Lebanon ever had . He was assassinated by the Syrian regime of Hafez al Assad ( Bashar’s father) in 1977