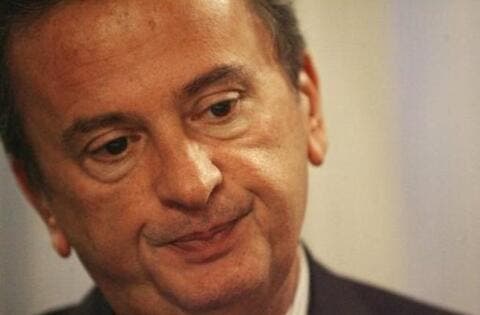 File photo of Lebanon’s Central Bank Governor Riad Salameh . He and his brother Raja are the target of a series of judicial investigations in Lebanon, Switzerland and France on suspicion of fraud, money laundering and illicit enrichment, among other allegations.
Share:

The residence of Central Bank Governor Riad Salameh in Rabieh was raided by Lebanon’s state security forces on Tuesday to execute a judge’s subpoena , but could not find according media reports said.

Aoun had issued the subpoena against Salameh in February after he failed to show up for a third interrogation session in a lawsuit filed against him by the People Want to Reform the System group. She pledged that she “will continue to pursue Salameh until he is brought to justice.”

This is the second raid by the security forces of the residence of Central Bank Governor in Rabieh. Last month ( June 21 ) another raid took place to execute judge Aoun’s subpoena but they could not find him.

Reactions to the raid

“Raiding the Central Bank in a theatrical manner is not the right way to address the problem,” Mikati who is known for defending Salameh said.

“We’re not defending anyone,” he added. “But we hold onto a fair and non-selective judiciary.”

He called for a political consensus on a new Central Bank Governor..

He also stressed his keenness on the financial reputation of Lebanon internationally, which is at an all time low according to the UN, following the destructive actions of Lebanon’s political and financial leaders

“The Lebanese leaders are responsible for forcing most of the country’s population into poverty, in violation of international human rights law”, the UN Special Rapporteur on extreme poverty and human rights, Olivier De Schutter, said in a report published in May 2022

For the last two and a half years, Lebanon’s economy has been in free fall. The country’s currency, the lira, has lost more than 90 percent of its value against the U.S. dollar; GDP has shrunk by nearly 60 percent; and close to 80 percent of Lebanese have slipped below the poverty line, along with practically all of the 1.5 million Syrian refugees living in Lebanon. Hundreds of thousands of people have fled the country.

The crisis, which is among the worst to hit any country in modern history, was precipitated by the collapse of what UN Secretary General António Guterres described as “something similar to a Ponzi scheme”: for years, the country’s central bank used ordinary bank depositors’ money to finance the corrupt and wasteful spending of successive Lebanese governments. Participants in the scheme reaped huge returns—until 2019, when it all came tumbling down. The pyramid scheme may not have been technically illegal, but it nonetheless amounted to corruption on a grand scale: Lebanese elites made a killing, spirited their ill-gotten gains abroad, and left millions of their impoverished countrymen holding the bag.

But the crisis wasn’t just caused by greed and corruption; it has been prolonged by the unwillingness of those who are responsible to change their ways or to assume their fair share of the country’s massive financial losses.

CORRUPTION OF A STATE

Lebanon is governed by an unwieldy sectarian system that divides political representation among 18 officially recognized sects—each with its own political boss and patrimonial fiefdom. By divvying the top government positions among Sunnis, Shiites, and Christians, however, this system has facilitated the capture of state institutions by elites, enabling them to exploit public resources for private gain and to solidify their hold on their sectarian constituencies.

Corruption in Lebanon, however, is not just a matter of political patronage and rotten public contracting. For decades, Lebanon’s largely unproductive economy relied on regular infusions of foreign capital to function. When those inflows slowed because of deepening political disfunction and conflict—including in neighboring Syria—the country’s central bank resorted in 2016 to what it called “financial engineering” to fund government deficits and maintain an artificially high value for the Lebanese lira. In short, the central bank paid Lebanese commercial banks exorbitant interest rates for dollar deposits, and those banks in turn offered their own generous returns to lure more depositors. Everyone involved made a lot of money, even as the country’s financial sector stealthily took on huge systemic risk.