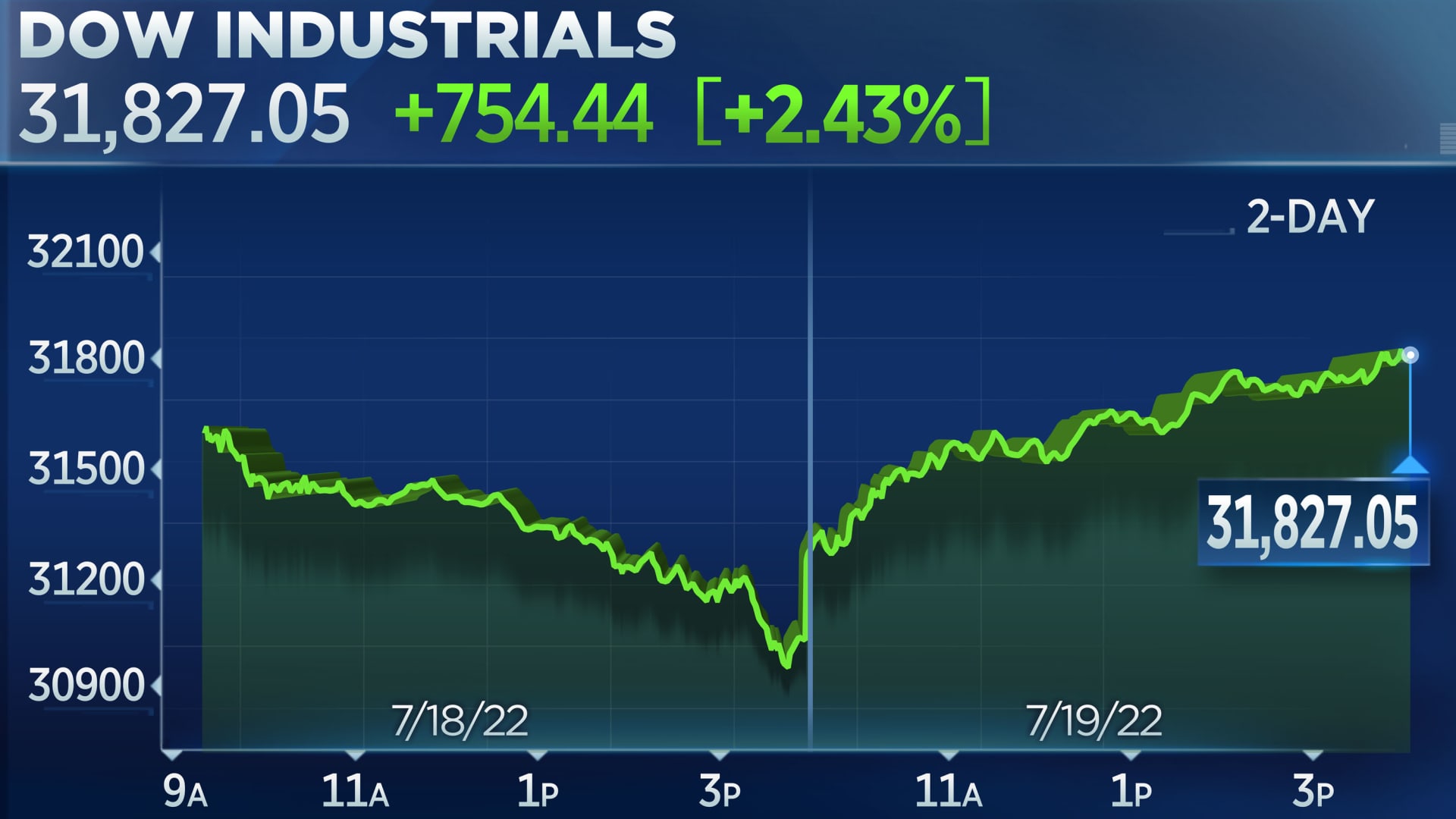 US Stocks rallied Tuesday, with the market resuming a bounce from last month’s lows, as traders bet on strong corporate earnings reports and wagered that markets have found a bottom.

All three major averages are above their 50-day moving averages for the first time since April. The broader market index has gained almost 7.4% off its June 16 closing low.

Investors are betting that stocks have reached a bottom after their steep declines this year, and as the latest round of earnings reports showed businesses are working through economic pressures better than feared in the second quarter.

“Both investors and the companies were expecting hot inflation, so companies talking about hot inflation having happened in that second quarter was not a surprise at all,” said Kim Forrest, founder and chief investment officer at Bokeh Capital Partners. “What was a surprise was that they were able to manage through it well.”

Investor sentiment has worsened to a point that some on Wall Street believe markets are set up for a relief rally ahead. Investors’ panic may have teed up a fantastic buying opportunity, according to a Bank of America survey of professional investors on Tuesday. Indeed, survey participants’ bearishness suggests that the sellers are washed out, and stocks may rise from here.

The Bank of America survey found that the allocation to stocks in portfolios is at its lowest since October 2008, one month after the collapse of Lehman Brothers, while cash holdings are the highest since 2001.

A pullback in the dollar aided the rally. This was particularly the case for shares of tech companies with large portions of foreign sales that are taking earnings hits from the impact of the strong greenback this year.

Still, some analysts continued to recommend investors prepare for more losses ahead.

″[While] I acknowledge sentiment is bad and we could see a large, tactical rally, I am currently more concerned about protecting downside than missing upside, in the aggregate,” Wedbush analyst Kevin Merritt wrote in a Tuesday note.

Meanwhile, stocks absorbed a weaker-than-expected print in U.S. housing starts, which fell 2% in June to a seasonally adjusted annual rate of 1.559 million units.

All sectors in the S&P 500 were higher Tuesday. Communication services and industrials led the gains, rising more than 3%.

Solid earnings reports boosted the shares of many companies, even as a stronger dollar weighed on the results of others.

Bank stocks outperformed with shares of Truist Financial adding more than 2% and Citizens Financial Group rising nearly 2% on the back of strong results. Goldman Sachs rose about 5.6%. Bank of America and Wells Fargo advanced roughly 3.4% and 4.2%, respectively.

Meanwhile, shares of Halliburton climbed 2.1% as sharply rising oil prices this year helped lift profits for the oilfield services company in its most recent quarter.

Hasbro reported earnings per share that beat analyst expectations, though the toymaker’s revenue for the previous quarter came in a tad below expectations, according to consensus estimates from Refinitiv. Shares gained 0.7%.

Shares of IBM fell nearly 5.3% after the tech company lowered its forecast for cash flow, with IBM finance chief Jim Kavanaugh citing the U.S. dollar and a suspension of business in Russia. Still, the company reported results that beat Wall Street’s earnings and revenue estimates.

Johnson & Johnson shares declined about 1.5% after the pharmaceutical giant blamed a stronger dollar while cutting its full-year revenue and profit guidance. The company reported better-than-expected top and bottom line results.

As of Tuesday morning, roughly 9% of S&P 500 companies have reported calendar second-quarter earnings. Of those, about two-thirds have beaten analyst expectations, FactSet data shows.

Shares of Netflix popped 5.6% ahead of the streaming company’s earnings report scheduled for after the close. Later in the week, Tesla, United Airlines, American Airlines, Snap, Twitter and Verizon are among those scheduled to report.

“Trading is likely to remain very choppy, with more bear market rallies, in the months ahead,” Wolfe Research’s Chris Senyek wrote in a Tuesday note.