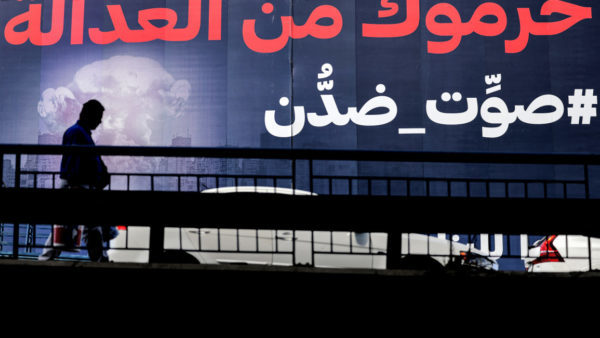 A man walks past a giant electoral billboard in Lebanon’s capital Beirut on 13 April 2022, showing text in Arabic reading ‘they deprived you of justice, #vote_against_them’, ahead of the May parliamentary election. [Getty]
Share:

In-depth: Amal and Hezbollah have ruled over south Lebanon without any competition since its liberation in 2000. But with the emergence of a new opposition during the 2022 elections, the tide might be turning against the political duo.

On 16 April, members of Secular Clubs in southern Lebanon were attacked by Amal Movement supporters on their way to the village of Sarafand for the official launch of the electoral list, ‘Together For Change’.

Soltan Husseini, president of the Tyre Secular Club and a member of the list’s political campaign, told The New Arab that to stop them from reaching their destination Amal supporters blocked the road, cursed at passersby, and surrounded the restaurant where the event was taking place.

“At one point they stopped allowing people to come into the restaurant and whoever went outside or tried to object could potentially be attacked or shot at,” Husseini said.

Three out of seven candidates were able to make it while the rest were threatened with gunshots and forced to turn back.

Although the incident left them shocked and in fear for their lives, Husseini said it was also an invigorating moment in their fight against the Shia political duo – Hezbollah and the Amal Movement. The two dominant powers have held a tight grip over the south since its liberation from Israel’s occupation in 2000.

Lebanon’s parliamentary elections are set for 15 May. Running against establishment parties like Amal and Hezbollah are opposition candidates marred by diverging lists, many of whom see the vote as setting the stage for future changes beyond 2022.

However, political observers say that to witness any radical changes in the south the opposition must adapt their approach to adopt a Shia-catered narrative.

Difficulties in the electoral south

After their encounter with Amal, Husseini said that the opposition list rescheduled its launch for 24 April in Tyre, this time using security forces to take precautionary measures against potential attackers.

“In reality, Amal did us a favor by popularizing our list and marketing it for free. This helped us garner more support and resulted in more people attending our second launch,” Husseini said.

The south is made up of three constituencies where opposition candidates are running. All constituencies, except for South 3, have multiple opposition lists where groups and parties failed to unite, despite incessant calls for unity.

Moreover, Husseini said that candidates faced an ideological battle waged by the Shia duo to demonise the opposition and threaten their credibility.

Whoever speaks out against Amal is perceived as a threat to the community, and those who criticize Hezbollah were seen as “traitors” and “Israeli agents”, he added.

The fear of violent retaliation, as witnessed in Sarafand, is one of the primary reasons that those who are opposed to Amal and Hezbollah remain silent. Ali Mourad, the opposition candidate in South 3, says that people need to see courageous candidates leading the fight.

Originally from the village of Aitaroun, Mourad says the government has neglected the south, creating a void that Amal and Hezbollah have filled by taking over municipalities, religious compounds, and offering social services.

Hezbollah considers these efforts as the first step towards returning dignity to Shia Muslims – a community that was often denied the benefits of Lebanon’s urban and rural development programs.

Although Hezbollah has been a fixture of the Lebanese government since 1992, it wasn’t until the war with Israel in 2006 that accusations of treason propagated within the Shia community, Mourad said.

Hezbollah official, Ibrahim Amin Al Sayyed, even stated in February that the upcoming elections would be another version of the 2006 war, but on a political level. This kind of rhetoric portrays the opposition as ‘enemies’ that need to be defeated.

Within such an atmosphere of tyranny and oppression, Mourad wants to introduce a new political narrative to the electoral south, an achievement in itself.

“The southern electorates are divided between the stubborn establishment supporters, the ones who encourage change but prefer to boycott the elections, and the October 17-born electorates that are excited to vote the establishment parties out. We’re mainly working to convince the latter two to vote for us,” Mourad said.

As for experiences with intimidation, Mourad said that so far harassment has been limited to online comments by the political duo’s supporters, which he expected and does not mind.

However, Hasan Bazzi, who’s running alongside Mourad in the ‘Together For Change’ list, has had a different experience.

The candidate told The New Arab that the Christian-led Lebanese Forces (LF) party had started a smear campaign against him to deter Christian voters from supporting the list.

Bazzi claimed the move was in response to a false belief by the LF that he supports Hezbollah’s arms, which in itself is a controversial issue amongst the southern opposition.

For him, the resistance army is a distinct entity from Hezbollah and all citizens have the right to remain equipped in case of an Israeli incursion.

“Until our national army is armoured with the right arsenal to protect all Lebanese borders, I support keeping the arms within the resistance army, at least for the time being,” Bazzi said.

South 3 is a Shia-dense constituency that encompasses bordering villages with Israel, which suffered heavy casualties during Hezbollah’s war with Israel in 2006. Therefore, according to Mourad, Hezbollah and Amal perceive the constituency as the centre of their power.

But South 3 is also home to one of the largest, most politically and religiously diverse electorates in the southern region willing to vote anti-establishment.

Although expectations of fraud, clientelism, and corruption threaten the legitimacy of the political process, Bazzi is optimistic about his list’s ability to score at least one seat. Husseini, on the other hand, said that the South 2 list is not quite as optimistic.

“We still encourage people to vote but we see the potential behind a massive loss that will teach the opposition how to unite better for the next round in 2026. For us, the real work starts on May 16, when the elections are done and we have four years to set the stage for a stronger opposition,” Husseini said.

Political analyst Hanin Ghaddar told The New Arab that as the election nears it may be too late for the southern opposition to address the setbacks facing them.

Creating a different electoral approach that will reap better results in the future will be critical, she says.

“A political party is needed to compete with Hezbollah and to reintegrate the Shia community back into Lebanese society. Someone needs to speak their language and offer them socio-economic reforms that conform to their needs,” Ghaddar said.

According to the analyst, Hezbollah is the main power player to confront. Other than the promises of military defense and social services, the ‘Party of God’ has also relied on emphasizing the Shia identity of its supporters to create a unified sense of loyalty and belonging.

“If you want to work towards ending sectarianism, you must first admit that it exists. The Shiites need people that address them as Shiites, similar to what Hezbollah does,” Ghaddar said.

Another issue, the analyst said, was that the opposition’s political programs were not catered to the southern electorates. Instead, they are often abstract, full of slogans, and do not relate to the daily life of those in the south.

According to Ghaddar, people are in need of candidates that stem directly from their community and are able to address Hezbollah’s detriment to the Shia community openly and courageously, while also presenting a functional alternative.

“The damage is already done for this year. But for future rounds, the opposition should develop a grassroots political movement that the Shiites find relatable, trustworthy, and genuinely concerned with their issues,” Ghaddar said.