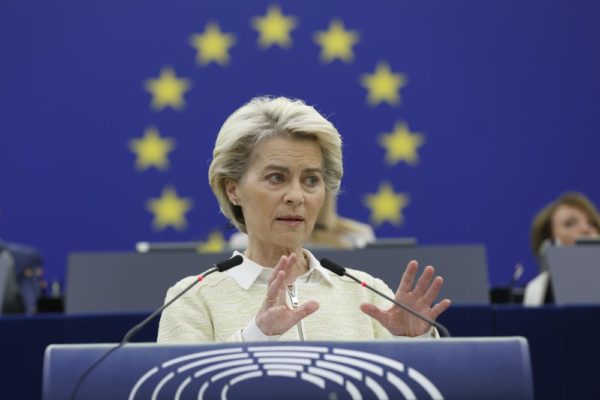 European Commission President Ursula von der Leyen delivers her speech during a debate on the social and economic consequences for the EU of the Russian war in Ukraine, Wednesday, May 4, 2022 at the European Parliament in Strasbourg, eastern France. (AP Photo/Jean-Francois Badias)
Share:

By LORNE COOK and SAMUEL PETREQUIN

BRUSSELS (AP) — The European Union’s top official on Wednesday called on the 27-nation bloc to ban oil imports from Russia and target the country’s biggest bank and major broadcasters in a sixth package of sanctions over the war in Ukraine.

“We will make sure that we phase out Russian oil in an orderly fashion, in a way that allows us and our partners to secure alternative supply routes and minimizes the impact on global markets,” von der Leyen said.

The proposals must be unanimously approved to take effect and are likely to be the subject of fierce debate. Von der Leyen conceded that getting all 27 member countries — some of them landlocked and highly dependent on Russia for energy supplies — to agree on oil sanctions “will not be easy.”

The EU gets about 25% of its oil from Russia, most of which goes toward gasoline and diesel for vehicles. Russia supplies about 14% of diesel, S&P Global analysts said, and a cutoff could send already high prices for truck and tractor fuel soaring.

If approved, the ban on oil imports would be the second package of EU sanctions targeting Russia’s lucrative energy industry since the country invaded Ukraine on Feb. 24.

In a video message posted on Twitter, Ukraine’s Foreign Minister Dmytro Kuleba welcomed Von der Leyen’s proposal for an oil embargo. He said Ukraine is not happy it will be delayed for several months, but “it’s better than nothing.”

“I think what should be clear now is that (the time) for half-sanctions or half-measures when it comes to sanctions is gone,” Kuleba said, arguing that the EU can no longer support Ukraine on one hand by imposing sanctions, while continuing to pay Russia for oil and gas and support their “war machine.”

“As long as Russia continues to receive revenues in billions … from the European Union … we cannot speak of defeating Russia,” he said. “They will continue financing their war machine from oil and gas revenues.”

In addition to sanctions on various entities and individuals, including Russian President Vladimir Putin and members of his family, the EU previously approved an embargo on coal imports.

The EU has started discussions on a possible natural gas embargo, but consensus among member countries on targeting the fuel used to generate electricity and heat homes is more difficult to secure. The region gets about 40% of its natural gas from Russia.

Hungary and Slovakia previously said they wouldn’t take part in any oil sanctions. Von der Leyen didn’t elaborate on whether they would receive an exemption from the sanctions, although it appeared likely.

Slovak Economy Minister Richard Sulik said Wednesday that Slovakia was not against the punishing measures but is asking for a transition period of three years. Czech Prime Minister Petr Fiala said his country is ready to support the package but also needs to be allowed more time — about two or three years — before it can implement a ban on Russian oil, in order to increase the capacity of pipelines to get oil from other sources.

Ukraine’s Kuleba said that any country which continued to oppose the embargo on Russian oil could be considered “complicit in the crimes committed by Russia in the territory of Ukraine.”

The EU and Russia are playing “a game of chicken. It is hard to say who will swerve/blink first. The Russians for fear of running out of money. Or Europe for fear of the lights going out,” James Nixey, the director of the Russia and Eurasia program at London’s Chatham House think tank, said.

Von der Leyen also said that the EU should target high-ranking military officers and others “who committed war crimes in Bucha,” a suburb of the capital Kyiv. Ukrainian officials have alleged that retreating Russian troops carried out mass killings of civilians in Bucha.

“This sends another important signal to all perpetrators of the Kremlin’s war: We know who you are. We will hold you accountable. You’re not getting away with this,” von der Leyen told the lawmakers.

EU diplomats confirmed that the European Commission’s plans also include an asset freeze and travel ban on the head of the Russian Orthodox Church, Patriarch Kirill of Moscow. The diplomats have direct knowledge of the discussions but were not authorized to speak publicly as negotiations continue.

Kirill is a longtime Putin ally and has justified Russia’s invasion of Ukraine.

Von der Leyen said that Putin’s intention is “to wipe out Ukraine from the map,” but predicted he will fail in his deadly enterprise. “Ukraine has risen in bravery and in unity,” she said. “And it is his own country, Russia, that Putin is sinking.”

Banks are also in the EU executive arm’s sights, and notably Russia’s biggest, Sberbank. Von der Leyen said the aim is that “we de-SWIFT Sberbank.” SWIFT is the major global system for financial transfers, and the EU has already excluded several smaller Russian banks from it.

“We will also de-SWIFT two other major banks in Russia. By that, we hit banks that are systemically critical to the Russian financial system and Putin’s ability to wage destruction,” she said.

Von der Leyen added that those alleged to be spreading disinformation about the war in Ukraine would be targeted.

“We are banning three big Russian state-owned broadcasters from our airwaves. They will not be allowed to distribute their content anymore in the EU, in whatever shape or form, be it on cable, via satellite, on the internet or via smartphone apps,” she said.

Von der Leyen didn’t name the broadcasters but branded the television channels “as mouthpieces that amplify Putin´s lies and propaganda aggressively. We should not give them a stage anymore to spread these lies.”