How to avenge the Lebanon boat disaster? Get out and vote 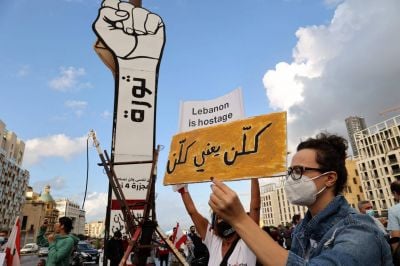 File photo: Anti government protest ( all means all) . The majority of the Lebanese were hoping that the 2022 election will result in the election of new revolutionary faces and get rid of all the corrupt Lebanese politicians starting with Hezbollah’s Nasrallah, FPM’s Bassil, and Amal’s Berri, Aoun and the rest of the contemptible old guard . Just over 10 % of the parliament is now represented by October 17 figures. Hezbollah and its allies lost their parliament majority but according to analysts if the opposition does not unite , Hezbollah and its allies will regain control and will be able to force on the country , the new president and PM . The recent election of Berri as a speaker for the 7th time and the election of a FPM MP Elias Bou Saab as Berri’s deputy showed that the opposition was fragmented and didn’t know how to play the political game. Analysts believe “that if the October 17 MPs will behave as if they are still protesting outside the parliament , they will have no chance of influencing future legislation . The October 17 MPs are now inside the parliament and should act accordingly “
Share:

With each passing day the Lebanese ship sinks deeper under water. The drowning of more than a dozen desperate citizens on an overloaded migrant boat off the coast of Tripoli last week was stark evidence of why elections are necessary to transform this appalling reality, but still there are those who exploit the tragedy to try to halt or sabotage the vote.

The pro-Hezbollah newspaper Al-Akhbar declared: “This death boat put an end to the Tripoli election campaigns.” With scarcely concealed glee, the like-minded Addiyar newspaper voiced the expectation that the tragedy would encourage Sunnis to boycott the vote.

Angry mourners tore down the campaign images of Tripoli’s candidates. One furious relative told Al-Jadeed TV: “There will be no elections in Tripoli until our sons are recovered from the sea.”

This anger is rightly directed at the political classes who have navigated Lebanon to such desperate straits. Conversely, the solution is to use the ballot box to elect pro-revolution figures promising radical change. If revenge is to be had, this is the most far-reaching vengeance citizens can wreak upon their tormentors.

In this bitter and torrid climate, conspiracy theories are flying thick and fast about the timing of this disaster, and who benefits. It did not help for the Navy to claim that the boat simply sank because it was overloaded, before it emerged that the Navy themselves had rammed it.

However, beware those who are exploiting this disaster to try to drive a wedge between the Army and citizens; the army is one of the few bulwarks Lebanon has, preventing descent into anarchy. Hezbollah sources warn: “There is a black room working to undermine security and stability ahead of the elections.” Well, they would know!

Hezbollah knows that this tsunami of public anger could upset its schemes to purchase the support of candidates in working-class areas such as Tripoli. With a note of desperation, one pro-Hezbollah commentator warned Tripoli’s citizens against “voting for those who made you poor and hungry, migrate, and get killed on land and at sea.”

We laugh bitterly when politicians call for a death-boat investigation, because we know how that would go: Blocked at every turn, or weaponized to attack political rivals. So yes, let’s have an investigation. But let’s first bring other investigations to a conclusion and secure the necessary arrests — including the 2020 Beirut port explosion probe, in relation to which even President Michel Aoun is now implicitly condemning Hezbollah for “invoking immunities, privileges and legal loopholes which paralyze the judiciary’s capabilities.”

My birthplace, the gorgeous city of Tripoli has time and again been dealt an unfair hand. The place that spawned Lebanon’s billionaires is mired in poverty. During the civil war it was one region where religious sects weren’t senselessly slaughtering each other. Now it is the focus of efforts to set citizen against citizen — including Hassan Nasrallah’s poisonous sectarian splutterings, which portray all Tripoli’s Sunnis as brainwashed Daesh recruits. Meanwhile local people describe a constant flow of small boats departing Tripoli’s coast, seeking some kind of future anywhere but Lebanon.

With the deadline for expat voting just hours away, Foreign Minister Abdallah Bou-Habib is accused of deliberately complicating voting regulations for Lebanese overseas. In one case, several members of the same family were forced to drive to polling centers hours away from each other. I’m sure it is a total coincidence that the consul-general in Australia, where several of the worst examples have emerged, is affiliated with Aoun’s Free Patriotic Movement, which has done everything in its power to sabotage elections on behalf of its Hezbollah allies.

Parliamentary Speaker Nabih Berri is also doing everything possible to disrupt the vote. When “Together for Change” pro-opposition elements tried holding an event, Berri’s thugs blocked roads and attacked them with rocks. Those who gained entry were beaten and accused of being traitors, serving the agenda of Israel and foreign embassies.

Those of you who believe elections can’t change anything should ask yourselves what Nasrallah, Berry and Gebran Bassil are so scared of!

Tehran has also been trying to bribe the electorate with empty promises about “considering” providing Lebanon with electricity; this from a country that itself suffers regular electricity blackouts, and has even sought to mitigate them by blocking power supplies to Iraq.

Nasrallah, meanwhile, is provoking Israel with threats that Hezbollah and Lebanon are ready to respond “quickly and directly” to military invasion. Seriously? Lebanon can’t even manufacture passports fast enough for the flood of people seeking to emigrate, and the passport office closed down because it ran out of materials.

The final two operational power plants in Lebanon shut down last week while awaiting the arrival of diesel fuel from Iraq. The country was already surviving on a paltry few hours of electricity per day. With the heat of summer, such shortages will put lives at risk, and make it impossible to keep hospitals, schools, factories and essential institutions open.

Such is the misery of everyday life that getting into a tiny inflatable boat to risk drowning in the Mediterranean is somehow an appealing option. Tripoli’s citizens are entitled to ask why they should participate in an electoral system that has always failed them, when they can barely keep their families from starvation. But this is precisely why they must participate — by voting for revolutionary candidates who pledge to burn this corrupt sectarian system to the ground, and forcing them to keep that promise.

I beg all of those preparing to flee Lebanon, stay to cast your votes against the kleptocrats and war criminals. If we all use our votes with the wisdom and sophistication that we Lebanese are famous for, when real change is within our grasp.

It shouldn’t be long-suffering citizens who risk their lives in inflatable death traps. Instead, let’s cast Messrs. Nasrallah, Bassil, Berri, Aoun and the rest of the contemptible old guard out to sea in their own overloaded vessel, leaving the rest of us free to rebuild this shattered nation in peace.