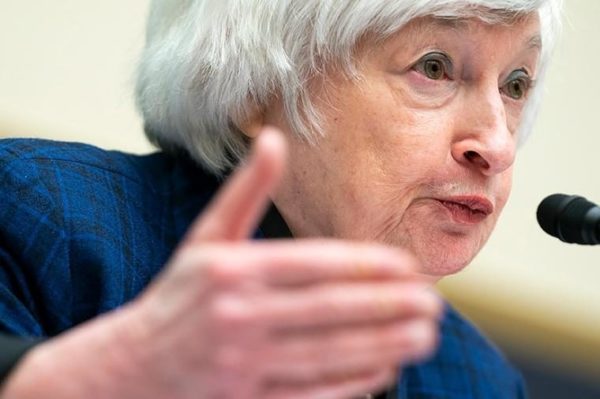 USTreasury Secretary Janet Yellen said on Wednesday that the United States would not be participating in Group of 20 meetings if Russia was present .and that President Joe Biden wants Russia expelled from the Group of 20 major economies forum.
Share:

Janet Yellen said Russian atrocities are an affront to global order that will have widespread economic repercussions.

US Treasury Secretary Janet Yellen has warned that Russia’s aggression in Eastern Europe will have “enormous economic repercussions in Ukraine and beyond,” and that President Joe Biden wants Russia expelled from the Group of 20major economies forum.

Her comments at a US House Financial Services Committee hearing on Wednesday raised questions about the future of the G20, which has been the premier global economic and policy forum since the 2008-2009 financial crisis.

“President Biden made it clear, and I certainly agree with him, that it cannot be business as usual for Russia in any of the financial institutions,” Yellen said. “He’s asked that Russia be removed from the G20, and I’ve made clear to my colleagues in Indonesia that we will not be participating in a number of meetings if the Russians are there,” Yellen said.

The G20 finance ministers and central bank governors are due to meet in person and virtually in Washington later in April on the sidelines of International Monetary Fund and World Bank meetings. Indonesia holds the G20 presidency this year and plans to host a finance meeting in July and a leaders summit in November.

The comments come as the Biden administration announced a new round of sanctions, including against President Vladimir Putin’s two adult daughters and toughening penalties against Russian banks in retaliation for “war crimes” in Ukraine.

The US and Western allies have imposed an avalanche of sanctions against Russia in the first weeks of the war and administration officials in recent days have put more focus on closing loopholes that Russia might try to use to circumvent them.

“Treasury is committed to holding Russia accountable for its actions so it cannot benefit from the international financial system,” Yellen said.

Russia’s invasion, she added “including the atrocities committed against innocent Ukrainians in Bucha, are reprehensible, represent an unacceptable affront to the rules-based global order, and will have enormous economic repercussions for the world”, she told the committee.

The rising price of energy, metal, wheat and corn that Russia and Ukraine produce “is going to escalate inflationary pressures as well”.

I am deeply shocked by the images of civilians killed in Bucha, Ukraine.

It is essential that an independent investigation leads to effective accountability.

Inflation in the US has reached 40-year highs as an inflation metric closely monitored by the Federal Reserve jumped 6.4 percent in February compared with a year ago, the largest year-over-year rise since January 1982.

“The sanctions we’ve placed on Russia are pushing up the price of energy. It’s a price that’s important to pay to punish Russia for what it’s doing in Ukraine,” she added, drawing on how the conflict is impacting Americans at home.