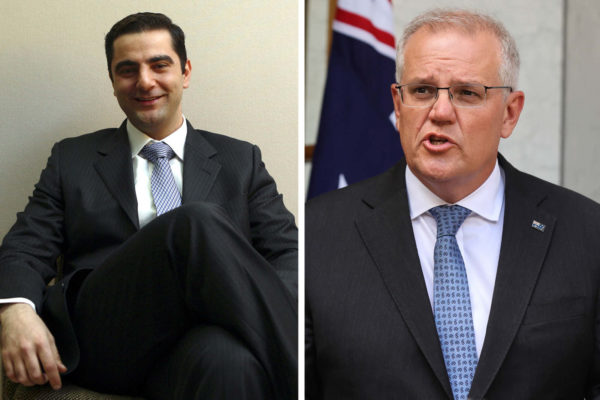 Michael Towke barely hinted at the way he felt about Scott Morrison the last time he went public about the savage Liberal contest in 2007 that handed the Prime Minister a prize seat in Parliament.

“These guys were prepared to ruin my life,” Towke said in these pages in 2009 when he spoke about the dirt thrown at him during the Liberal ballot to choose the party’s candidate for Cook, a blue-ribbon seat that includes Cronulla in southern Sydney.

Towke would not say who “these guys” were. He would not say what they did. He chose his words carefully at the time to tell his side of the story without naming names. Yet he was scarred by the experience. Who wouldn’t be? His success at the party ballot in July 2007, where he won 82 votes and Morrison won 8, triggered a brutal political takedown that included days of stories in the media that sought to trash his reputation.

Those stories included claims he had a criminal history, falsified his qualifications and lied about his time in the army reserve. One of those who supported him, Marie Ficarra, a former state Liberal MP, calls it the most vicious preselection she has seen in 40 years.

Politicians grow thick hides over time but Towke never had the chance. The political machine spat him out. Nobody should be surprised that he could be angry to this day. Or that he might want to be heard.

The media attention on Towke was relentless, especially at News Corp Australia, and turned out to be expensive. He sued for defamation and refused an offer of $110,000 to buy his silence. He accepted a $50,000 settlement with News without a confidentiality agreement, leaving him free to talk to journalist Paul Sheehan at this publication to reject the false claims.

Sheehan wrote that there was a view among some senior Liberals that a Lebanese Australian could not win Cook in a tight election. Towke, a Maronite Catholic, did not name the senior Liberals.

By the time he told his story, however, it was too late to save his political career. Party officials decided he could not be the candidate almost as soon as he won the ballot. They did not like his recruitment of new members even though Malcolm Turnbull had stormed into Parliament just three years earlier with a breathtaking membership drive in the electorate of Wentworth.

Party headquarters ruled that Towke had paid for membership fees when signing people up and had therefore broken the party rules, so they ordered a new ballot and cleared the way for Morrison. The deputy director of the state division was Scott Briggs, a close friend of Morrison.

Liberals close to those events still insist that Towke was a bad candidate and had to be stopped. Asked to be quoted by name, however, they refuse. Asked to produce documents, they refer to old newspaper stories. The cycle of hearsay continues. The stronger defence for Morrison comes from Lebanese Australians who are willing to put their names to their praise for the Prime Minister, as many have done in these pages today.

Only now has Towke said in public what he felt then. “Amongst many unedifying tactics used to unseat me from my preselection victory for Morrison, racial vilification was front and centre and he was directly involved,” he told The Age and The Sydney Morning Herald on Saturday night. This was his first statement since the 2009 interview.

Towke names Morrison as part of the vilification. He confirms a statutory declaration he signed in 2016 in which he said Morrison told Liberals in 2007 they could not support Towke because he was Lebanese and there were rumours he was a Muslim. A signed statement by another Liberal, Scott Chapman, says the same. These documents had never been reported before last weekend.

That makes the claims new and incredibly damaging.

Morrison calls them simply untrue. He says the personal attack is timed for the eve of the election. “These are quite malicious and bitter slurs, which are deeply offensive, and I reject them absolutely,” he says.

The statutory declarations, obtained by this publication, were both sworn in April 2016, more than two years before Morrison became prime minister. They only emerged because NSW senator Concetta Fierravanti-Wells, who backed Towke in 2007, chose last Tuesday to denounce Morrison as not being fit to be prime minister.

It is no secret that Fierravanti-Wells has disliked Morrison for years but her denunciation was astonishing. She was suddenly free to speak her mind after losing a ballot last weekend to keep her place in the Senate. The most dangerous politician is often the politician with nothing to lose.

Once Fierravanti-Wells told the Senate that she knew of statutory declarations about the 2007 ballot, the search was on to locate them.

Towke was an unexploded bomb. Politics is littered with them because so many who join the fray are so scarred when they emerge. The brutality of the business makes it impossible to suppress the memory. The detonation is just a matter of time.

Sooner or later, Towke would want to be heard.

David Crowe is chief political correspondent for The Sydney Morning Herald and The Age.