From Beirut to Bagdad , over 20,000 Lebanese flee crisis seeking jobs in Iraq 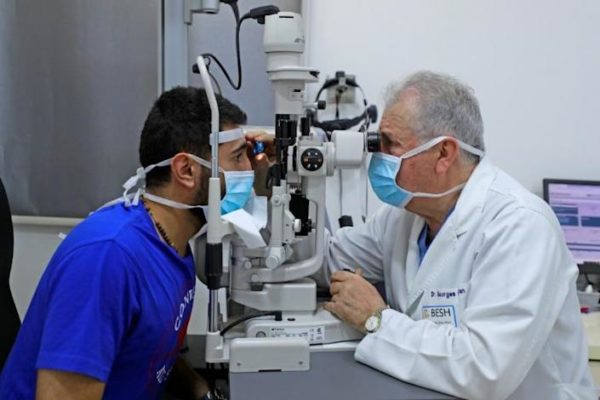 From Beirut to Baghdad: over 20,000 Lebanese flee crisis seeking jobs in Iraq Lebanese ophthalmologist George Cherfan examines a patient’s eyes at a branch of the Beirut Eye and ENT Specialist Hospital in the Iraqi capital Baghdad AFP/Ahmad Al-Rubaye)
Share:

Iraq, once synonymous with conflict and chaos, is becoming a land of opportunity for Lebanese job-seekers fleeing a deep economic crisis back home.

Akram Johari is one of thousands who fled Lebanon’s tumbling currency and skyrocketing poverty rates.

Last year, he packed his bags and boarded a plane from Beirut to Baghdad, using social media to search for opportunities.

“I didn’t have enough time to look for a job in the Gulf,” the 42-year-old said, explaining why he eschewed the more traditional path for those seeking economic opportunities in the region.

With its relative proximity and visas on arrival for Lebanese, the Iraqi capital seemed a good option.

“I had to take quick action, and so I came to Baghdad and began searching for work on Instagram,” Johari said, speaking in a restaurant he has run for about a month.

Lebanon is grappling with an unprecedented financial crisis that the World Bank says is of a scale usually associated with war.

Beirut’s crisis, driven by years of endemic corruption, has seen Lebanon’s currency lose more than 90 percent of its value against the dollar.

Lebanon’s 675,000-pound monthly minimum wage now fetches around $30 on the black market, and about 80 percent of the population now lives in poverty, according to the UN.

When he left Beirut, Johari was earning the equivalent of about $100 per month. In Iraq, he earns enough to support his family back home, he said.

More than 20,000 Lebanese citizens arrived in Iraq between June 2021 and February 2022, excluding pilgrims visiting the Shiite holy cities of Najaf and Karbala, according to the Iraqi authorities.

Lebanon’s ambassador in Baghdad, Ali Habhab, said that movement from Lebanon to Iraq “has recently multiplied”.

There are more than 900 Lebanese businesses now operating in Iraq, the majority of them in the restaurant trade, tourism and health, Habhab said.

In particular, there have been “dozens of Lebanese doctors who offer their services” in Iraqi hospitals, he said.

Iraq’s decades of conflict — from the Iran-Iraq war of the 1980s, to the US-led invasion of 2003 and subsequent sectarian conflict, and on to the rise of the Islamic State group in 2014 — means that Baghdad might appear to be an unlikely magnet for those seeking to build a new life.

But since the country declared victory over IS in 2017, Iraq has slowly begun to recover its stability.

Today, streets in Baghdad that once witnessed atrocities are buzzing with shops lining main thoroughfares and cafes open late into the night.

According to Iraqi economic expert Ali al-Rawi, many Lebanese companies came to Iraq because they “know the investment environment well”, while many foreign companies from other countries “fear investing” because of its violent past.

“There is a lot of space for Lebanese enterprises in the Iraqi economy,” he said.

But Iraqis themselves have seen their fair share of economic hardship.

In a country where 90 percent of revenues come from oil sales, roughly a third of the population lives in poverty, according to the World Bank.

In 2019, nationwide protests erupted across Iraq, driven by anger over rampant corruption, the absence of basic services and unemployment — similar factors behind protests in Lebanon that erupted around the same time.

Lebanon was once a prime destination for medical tourism, as Iraqis flocked to better equipped medical centres in Beirut and other cities.

But, as with other sectors, Lebanon’s economic crisis has hit healthcare.

The Beirut Eye & ENT Specialist Hospital was once popular with Iraqi patients, but an official at the hospital, Michael Cherfan, said that “many doctors had left Lebanon”.

The hospital responded to the crisis in the way many Lebanese have — by opening a branch in Baghdad, sparing Iraqis the trip to Beirut.

“Our doctors come on a rotating basis,” Cherfan said. “Every week, one or two doctors come and do consultations and surgeries, earn some money and then return to Lebanon, which helps offset some of their losses.”

For Johari, while the money he earns in Iraq supports his family, it comes with a bitter taste. He flies home once a month, but he misses his family.

“It saddens me a lot that I can’t watch my two-month-old daughter grow up”, he said.