An Emotional Diary of The Lebanese Revolution 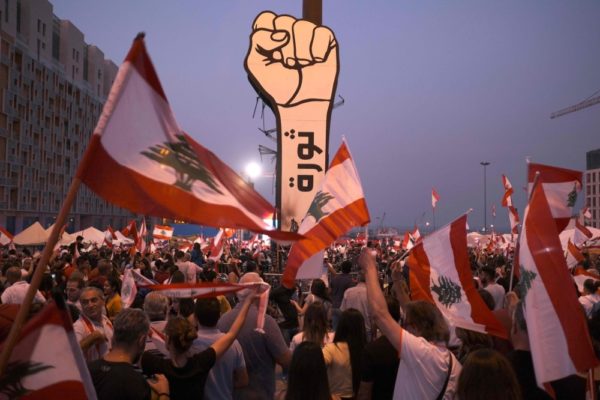 Lebanese photographer, Myriam Boulos documented the revolution, using the flash to emphasize the bodies of a people reclaiming their country together for the first time.

In 2019, after years of frustration in the face of corruption and growing inequalities, protests started to spark loudly in Lebanon. People from traditionally different social contexts gathered and unanimously called for the fall of the political elite. At the time, the country had not hit the crisis it currently goes through but public service has barely existed, garbage hardly picked up and infrastructures outdated. Despite the police’s violent response, protests only amplified in the following weeks and months, fed by the feeling of not being considered. The spark became fire.

With an urge to participate in this historical uprising, Lebanese photographer Myriam Boulos documented the unravelling of the revolution. “It all felt as if we were coming out of an abusive relationship to finally say: No, this is not normal”, she writes. Picture after picture, she captured the mixture of rage and exhilarating freedom born of suddenly speaking out loud. “It was the first time that we claimed our places, our city, our country, together”, she writes in a caption. She depicted the flames of the protest’s fire as much as those that animated the hearts of the protestors – flames that one can also see, 2 years on, as a premonition for the explosion at the port of Beirut the following year, the culmination of the ravage of corruption.

Photography became a powerful tool for Boulos, a means to take part in the revolution. At some point, she started with some female friends to take pictures naked in the streets of Beirut. “It was our own way of reclaiming our streets and our bodies. Everything that is supposed to be ours”, she comments in a caption. Photography became a way to keep a trace, to compose a diary to process her feelings and experiences. A picture of her white trousers stained with menstrual blood takes on a symbolic meaning in this context. The caption reads that it was shot after a march against sexual harassment – as an assertion of the female body. Metaphorically, it also evokes the failure of birth and the endless cycles of abusive politics the country is stuck into.

“Ressentir” (i.e “feeling”), a crossword reads on a photograph. In a country as disparate as Lebanon, the feeling was the common fuel, the last resort before the collapse, and Boulos’s main drive. “I don’t know if it’s the emotions/ hormones or maybe it is the weather, but my hair and my plants are growing, way too quickly. Karen told me that some plants grow a lot, before dying. (I answered that some men have an erection, before dying.)”, she writes while the moon keeps revolving.

All photos © Myriam Boulos, from the series What’s Ours.

Myriam Boulos is a documentary photographer based in Beirut, Lebanon. Since the age of sixteen, she has used her camera to question Beirut, its people, and her own position in Lebanese society. She is a nominee at Magnum Photos since 2021.

Laurence Cornet is a writer and curator based in Paris focusing on cultural and environmental issues. She is also the editorial director of Dysturb and the international photo editor at Le Monde.

This article is part of our feature series Photo Kernel, which aims to give space to the best contemporary practitioners in our community. The word Kernel means the core, centre, or essence of an object, but it also refers to image processing.