Zelensky calls on Russian troops to surrender: “We will treat you as people, decently” 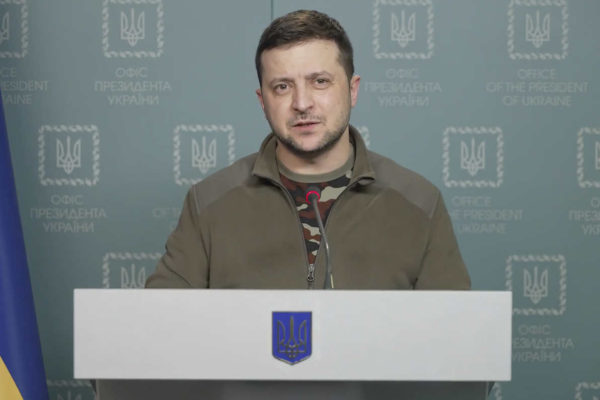 Volodymyr Zelensky calls on on he Russian troops to surrender“On behalf of the Ukrainian people, I give you a chance , we will treat you the way people are supposed to be treated – as people, decently.”” AP
Share:

Ukrainian President Volodymyr Zelensky has called on Russian troops to surrender in a video address posted online early on Tuesday.

“On behalf of the Ukrainian people, I give you a chance,” he said in a translation of his address shared by his office. “If you surrender to our forces, we will treat you the way people are supposed to be treated – as people, decently.”

In his address, Mr Zelensky said Russia had already lost 90 warplanes and that Russian troops “did not expect such resistance”.

“They believed in their propaganda, which has been lying about us for decades,” he said.

Zelensky’s call for surrender was not the first time the Ukrainian government made such a proposal to Russian troops. Two weeks ago, Ukrainian Defence Minister Oleksii Reznikov offered Russian soldiers cash and amnesty if they surrendered.

In an address delivered on Saturday, Zelensky said thousands of Russian soldiers had either been captured or had surrendered. This month, the Pentagon said some Russian troops had surrendered, but it did not say how many had done so.

Zelensky also said he was grateful for Russians who continued to fight Russian disinformation about the war, singling out a woman who walked in on a live broadcast of a Russian state-run news show on Monday evening, holding up a sign that said, “They’re lying to you here.”

The woman, Marina Ovsyannikova, worked for Channel 1, the channel of the broadcast she stormed. She was later detained and was being held at a small police station, according to OVD-Info, an activist group that supports Russians detained for protesting.

“To those who are not afraid to protest: As long as your country has not completely closed itself off from the whole world, turning into a very large North Korea, you must fight.” Zelensky said. “You must not lose your chance.”

This article originally appeared in The New York Times.