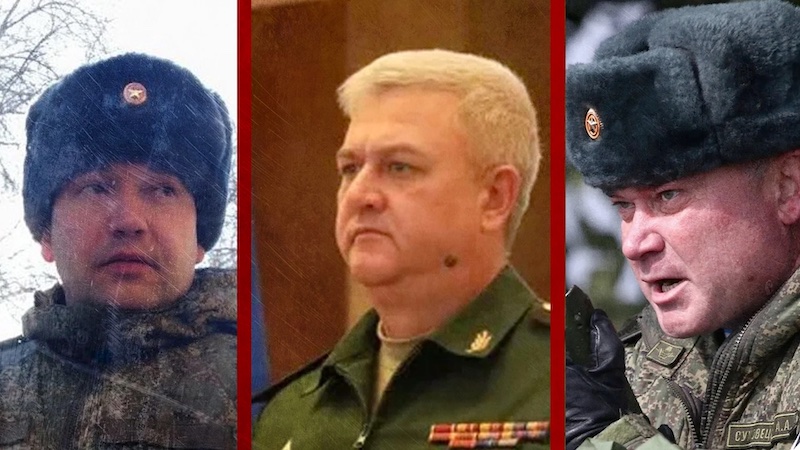 Russia has so far lost a number of Russian generals, with General Andrei Kolesnikov, of the 29th Combined Arms Army, killed in fighting on Friday – a top Putin’s ally has admitted the war is progressing slower than expected

The Kremlin is said to have been thrown into chaos following a number of blows to Vladimir Putin’s regime, as the planned invasion of Ukraine slows.

Putin is reported to be furious at the Russian failures so far but the Kremlin has denied asking China for weapons to help.

The invading forces have scarcely moved in recent days and the Russian attack is now mostly focused on intense shelling and airstrikes.

Efforts to assassinate Ukraine president Volodymyr Zelensky have failed with a ‘hit squad’ sent into Kyiv reported to have been thwarted by double agents.

Russia has so far lost a number of Russian generals, with General Andrei Kolesnikov, of the 29th Combined Arms Army, killed in fighting on Friday.

Kolesnikov was one of 20 major Russian generals who were believed to be leading the Ukraine invasion that has been riddled with tactical errors, according to Western officials.

His death will be a blow to Vladimir Putin and the Kremlin who maintains the invasion is continuing to go to plan. They still refuse to call the conflict a ‘war’.

Kolesnikov’s death follows the killing of Major General Vitaly Gerasimov, chief of staff of the 41st Army, who died outside Kharkiv.

While Major-General Andrey Sukhovetsky, a top paratrooper in Vladimir Putin’s invading forces, is alleged to have been killed by a sniper during a special operation in Ukraine.

Sukhovetsky was the first general to die, with Putin confirming his death in a speech eight days into the invasion.

Christo Grozev, executive director of investigative journalism outlet Bellingcat, said that confirmation of his death would be a “major demotivator” for Russian troops.

Sukhovetsky had reportedly been decorated for his role in annexing Crimea and Russian paper Pravda and graduated from Airborne Command School in 1995.

Ukraine’s defence ministry said that Gerasimov was killed outside the eastern city of Kharkiv, along with other senior officers.

The deaths of Russian generals comes after reports that a Kremlin spy chief and his deputy have been placed under house arrest by Putin – who is reportedly blaming his security services for setbacks in the invasion of Ukraine.

Sergey Beseda, head of the Federal Security Branch, Russia’s intelligence branch, was arrested along with his deputy, Anatoly Bolyukh, an expert claimed.

It comes after Russia finally admitted losing its first senior military intelligence officer during the war with Ukraine.

GRU spy Captain Alexey Glushchak died in the carnage in the Ukrainian port of Mariupol, although his country has given no details of how he was killed.

“Due to the strict secrecy of the military operation, the circumstances of the death of the Tyumen hero are not disclosed,” a statement read.

Putin could be ‘toppled in coup’

Putin could face the threat of being toppled by his own officers and generals, a journalist claimed.

Andrei Soldatov, a leading Russian investigative journalist, told Channel 4 News that “everything now seems to be possible” when asked if the Kremlin leader, a former FSB agent himself, could be deposed by his own men.

In the wake of the invasion, there have been reports that Putin was told by the FSB security service, the successor to the KGB, that Ukraine would capitulate easily and give up.

Matt Frei of Channel 4 News asked Mr Soldatov: “Is it possible that some senior generals, especially the ones who are on the front here, perhaps together with some disgruntled officers in the FSB, could turn against Putin to try and dislodge him?”

In response he said: “Obviously, everything now seems to be possible, but we need to remember that Putin is a trained KGB officer.

“He is well aware of risks to his personal security and safety and he has not one but two security services.

While chaos appears to escalate within the Kremlin, Ukraine’s Armed Forces estimated that approximately 12, 000 Russian troops have been killed, a staggering 303 tanks, 48 warplanes, 80 helicopters and over 1,000 armoured personnel carriers.

It comes as the head of Russia’s National Guard has said that Moscow’s military operation in Ukraine is not going as quickly as the Kremlin had wanted, in the strongest public acknowledgement yet that the invasion is not going to plan.

Viktor Zolotov blamed the slower-than-expected progress on what he said were far-right Ukrainian forces hiding behind civilians, an accusation repeatedly made by officials in Russia.

“I would like to say that yes, not everything is going as fast as we would like,” Mr Zolotov said in comments posted on the National Guard’s website.https://get-latest.convrse.media/?url=https%3A%2F%2Fwww.mirror.co.uk%2Fnews%2Fworld-news%2Finside-kremlin-chaos-amid-cracks-26462804&cre=bottom&cip=42&view=web

Those comments appeared to be at odds with an assessment made on Friday by Russia’s Defence Minister Sergei Shoigu, who told Putin that “everything is going according to plan”.

A column of Russian forces approaching Kyiv are now about 15 miles from the Ukrainian capital, the UK’s Ministry of Defence said this weekend.

Earlier, it was reported the Ukrainian army reportedly wiped out Russian armoured vehicles and a command centre.

Drone footage appears to show rockets being fired at armoured vehicles in the city of Mariupol – where Russian forces last destroyed a children’s hospital in an airstrike.

The aerial footage shared on social media appears to shows a BTR-82 APC and KamAZ-63968 ‘Typhoon’ vehicle being targeted successfully.

Military sources on the ground have told the Mirror Russian forces may have reached a critical mass point where they may have lost critical momentum and could lose.