Geagea wants to ‘revive’ spirit of Cedar Revolution ahead of elections 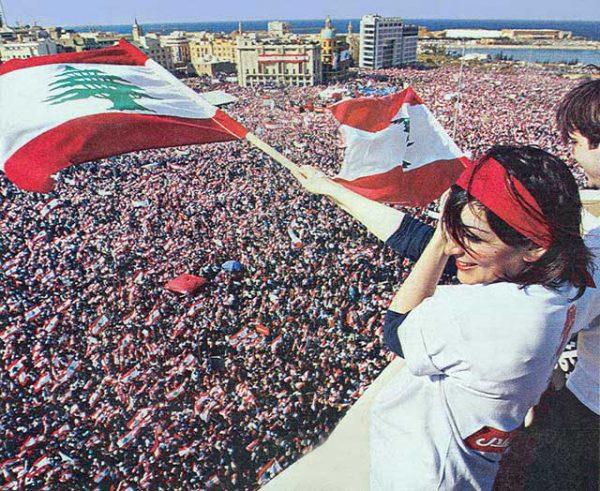 On March 14, 2005, a month after Hariri’s assassination , over a million Lebanese headed to downtown Beirut to demand the withdrawal of Syrian troops from Lebanon after a nearly 29-year of military presence. The mass rally was later dubbed the Cedar Revolution or Independence Uprising. The Iranian backed Hezbollah militant group whose operatives were convicted in Hariri’s assassination has replaced the Syrian occupational forces . The majority of the Lebanese now consider Hezbollah an Iranian occupational force
Share:

Lebanese leader Samir Geagea has vowed to “revive ” the spirit of the Cedar Revolution, as he launched his party’s parliamentary election campaign on the anniversary of the 2005 uprising.

“You must rely somehow on yourself, somehow on others,” Mr Geagea told The National in an interview on Monday, when asked about how he would revive the anti-Syrian alliance formed after the assassination of former Lebanese prime minister Rafik Hariri 17 years ago.

Earlier, Mr Geagea, 69, compared the March 14 movement with the coming elections and called on cheering supporters gathered at his residence in the snow-covered village of Maarab, north-east of the capital of Beirut, to vote in the May 15 poll.

“If the Lebanese do not move on May 15 in the right direction, the awaiting in this hellish tunnel could take years,” said Mr Geagea.

“We do not have elections — we have a battle to save Lebanon from the militia and the mafia,” he said, in a reference to the Iranian backed Lebanese political party and regional militia, Hezbollah.

Mr Geagea’s political party, the Lebanese Forces, commemorates the Cedar Revolution every year — but this time, the stakes are higher than usual. The country is gearing up for the first elections since its 2019 economic meltdown, which caused unprecedented social upheaval, poverty and rejection of traditional political parties.

The Lebanese Forces is seeking to capitalise on popular discontent by arguing that they have been less involved than others in corruption, despite its long involvement in local affairs.

Like many other current parties, the Lebanese Forces was active as a militia during Lebanon’s 1975-90 civil war.

It was banned in 1994, when Mr Geagea was jailed for 11 years in solitary confinement in the basement of the Defence Ministry. The Christian leader was the only former warlord jailed for crimes committed during the civil war.

His release coincided with the withdrawal of Syrian troops in 2005. This came after popular protests caused by the killing of Mr Hariri in a car bomb, along with 21 others, on February 14, 2005. The uprising came to be known as the Cedar Revolution.

One month after the assassination, big crowds rallied in Beirut to ask for Syria’s withdrawal after 29 years of occupation ― giving birth to the March 14 movement. Iran-backed Hezbollah, which also heads a regional militia, led a pro-Syrian counter-movement called March 8.

Today, many in Lebanon believe that pro-Hezbollah figures will gain ground in May’s election. This follows the withdrawal of three-time prime minister Saad Hariri — Rafik Hariri’s son and political heir — from politics in January.

By evoking the spirit of the Cedar Revolution, Mr Geagea hopes to reap votes from Hariri’s traditional supporters, say analysts.

Appealing to a different sectarian group is relatively unusual in Lebanese politics, in which the prime minister is always Sunni Muslim, the president a Maronite Christian and the Parliament speaker a Shiite Muslim.

“It is not a coincidence that I launch this call on March 14,” said Mr Geagea on Monday.

But it remains unclear if the Lebanese Forces leader, who directed attacks during his speech against his Christian rival, Hezbollah-allied President Michel Aoun, will be able to convince Sunni Muslim voters to rally around him.

“The Lebanese Forces are using their positioning against Iran as a lever to gain Sunni votes, but I don’t see Sunnis showing up,” said Mohanad Hage Ali, a research fellow at the Carnegie Middle East Centre in Beirut.

“What kind of economic system will we have? What price should bank owners pay for the crash? Will there be a system with more progressive taxes? More checks and balances to stop corruption from eating out public funds and derailing development effort?” he said.

“There’s a focus on the abstract notion of fighting Iranian occupation, but that acts as a rug to hide many questions that the Lebanese Forces are not willing to answer because that would antagonise the banking association and the business people that they’re relying on for elections.”

May Chidiac, a prominent Lebanese Forces figure who survived an assassination attempt in 2005, said: “There is no [political] programme. There are laws that must be respected and voted in Parliament.”

Addressing the rumors that politicians were able to send millions out of the country in late 2019, unlike most depositors who saw their transfers blocked by local banks, Ms Chidiac said: “The problem in Lebanon is corruption and to stop it, it must be cleaned from the inside.”

Mr Geagea, during his speech, called on the Lebanese to “expel from Lebanon this time, not the Assad army, but the state’s kidnappers, thieves and looters”.

During a questions-and-answers session with journalists, The National asked Mr Geagea about his political programme and how he planned to obtain accountability from Lebanese politicians accused of causing the country’s economic meltdown.

“It’s a very complicated situation in many ways. At the right moment, we will find solutions for each issue,” he said.

Originally published in the National AE