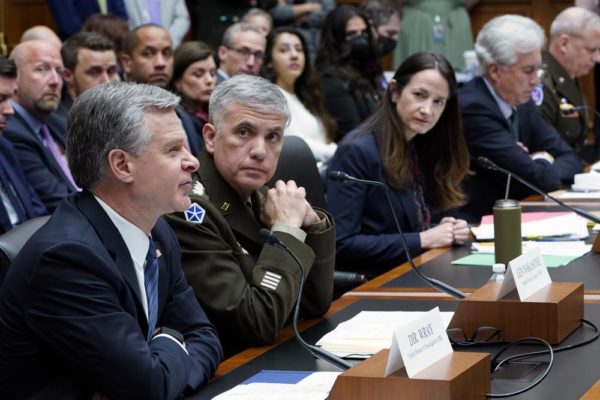 By NOMAAN MERCHANT and ERIC TUCKER

The testimony, in a hearing before the House Intelligence Committee, amounted to the first public assessment of the 2-week-old war by the nation’s senior intelligence officials, who offered their insights into the thinking and motives of Russian President Vladimir Putin as his forces continue their march through Ukraine.

The officials made clear that Russia’s assault has been slowed by unexpected resistance by Ukrainian defenders and that it was now uncertain if Putin would proceed with a “maximalist” strategy to try to capture all of Ukraine or would settle for something short of that. Either way, they said they believed he was determined to press his invasion forward despite mounting casualties, global sanctions and efforts by Western nations to isolate the Kremlin, including a U.S. ban on Russian oil imports.

“We assess Putin feels aggrieved the West does not give him proper deference and perceives this as a war he cannot afford to lose,” Director of National Intelligence Avril Haines said. “But what he might be willing to accept as a victory may change over time given the significant costs he is incurring.”

The U.S. officials who testified Tuesday noted that the invasion has played out largely as they had forecast, in contrast to Putin’s own overly rosy assessments of the speed with which he could take the country. U.S. officials, for instance, assess that Putin had banked on being able to seize the Ukrainian capital, Kyiv, within the first two days of the campaign but he has yet to be able to fully encircle the city, CIA Director William Burns said.

“He was confident that he had modernized his military and they were capable of quick, decisive victory at minimum cost. He’s been proven wrong on every count,” said Burns, a longtime Russia expert and former ambassador to Moscow. “Those assumptions have proven to be profoundly flawed over the last 12 days of conflict.”

Asked at one point by Rep. Raja Krishnamoorthi, an Illinois Democrat, whether he considered Putin to be “crazy,” Burns replied that he considered the Russian leader to be increasingly insulated and hardened in his views.

“In my opinion, that doesn’t make him crazy, but it makes him extremely difficult to deal with,” Burns said.

Russian troops killed in the invasion probably number between 2,000 and 4,000, said Lt. Gen. Scott Berrier, director of the Defense Intelligence Agency, though he noted that assessment was made with “low confidence.”

Even so, Moscow’s forces have managed to lay siege to Ukrainian cities and cut off food, water, heat and medicine, with continued shelling throwing into jeopardy attempts to evacuate civilians from the bombarded port of Mariupol, a city of 430,000. Asked about efforts to cut off food and water to Kyiv, Berrier said he could not say how many days of supplies the city had but that the situation could become “somewhat desperate” in 10 days to two weeks.

There are growing calls in Washington for the CIA and the Pentagon to support a potential Ukrainian insurgency. While Russia’s forces are larger and more powerful than Ukraine’s, an insurgency supported by U.S.-funded arms and training could significantly aid Ukraine’s defense.

Despite Putin’s announcement that he would raise Russia’s alert level for nuclear weapons, Haines said the U.S. has not observed unusual changes in Russia’s nuclear force posture.

Several officials pledged their agencies’ full effort to supporting the Ukrainian resistance. Much of the intelligence community’s work in Ukraine likely will take place in secret. But FBI Director Chris Wray said that at Ukraine’s request, the bureau had worked with social media companies to take down accounts linked to Russia that were spreading Ukrainian military disinformation.