Dozens killed in suicide bombing at Shi’ite mosque in Pakistan 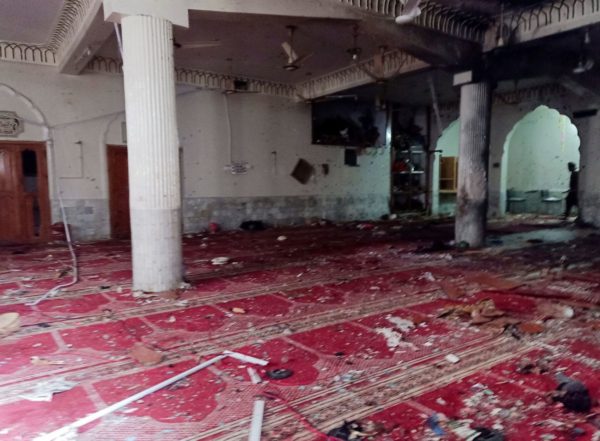 A general view of the prayer hall after a bomb blast inside a mosque during Friday prayers in Peshawar, Pakistan, March 4, 2022. REUTERS/Fayaz Aziz
Share:

Islamic State claimed responsibility for the bombing in a statement, which would make it one of the biggest attacks carried out by the group inside Pakistan.

An armed man who arrived near the mosque on a motorcycle opened fire when he was stopped by police, before forcing his way into a crowded hall and detonating his suicide vest, senior police official Haroon Rasheed said.

The attacker first shot at the police guards at the mosque’s entrance, killing one of them, he said. “The armed man entered the mosque and started firing on the worshippers and finally blew himself up,” Rasheed added.

Previously, police had said they were two men on the motorcycle.

The attack is one of the deadliest in years on Pakistan’s Shi’ite minority, which has long been targeted by Sunni Muslim Islamist militants, including Islamic State and Tehreek-e-Taliban Pakistan (TTP), also known as the Pakistani Taliban.

The Pakistani Taliban distanced themselves from the attack in a message sent to Reuters.

Many of the injured were in critical condition, officials at the nearby Lady Reading Hospital said, updating the previous toll.

Sardar Hussain, who lost three relatives in the blast, said the mosque was the only place of worship for the Shi’ite community in Peshawar’s old city.

Attacks by Islamist insurgents had become an almost daily occurrence in Pakistan until the military launched a crackdown on militants in 2014.

Worshippers at the mosque in Peshawar had gathered for Friday prayers, when congregations are usually the largest.

“Panic spread among the worshippers when the firing started. I ran to save my life,” one man, who did not give his name, told Reuters at a hospital where he was being treated for his injuries.

“Suddenly a man came in and started firing… He shot many people (and) then closed his eyes and blew himself up. After that, I have no idea what happened,” he said.

Pakistan’s Prime Minister Imran Khan condemned the bombing, according to his office.

The attack comes as the Australian cricket team are touring Pakistan for the first time in over two decades and staying in Islamabad, 140 kilometres (87 miles) from Peshawar.

Pakistan recently started hosting international teams again after security concerns forced them to shift many of their high profile international events to the UAE.

Following the blast, the Australian cricket coach Andrew McDonald said the team touring Pakistan will be guided by security experts.