Russian troops grapple with shortages of food, fuel and morale in Ukraine 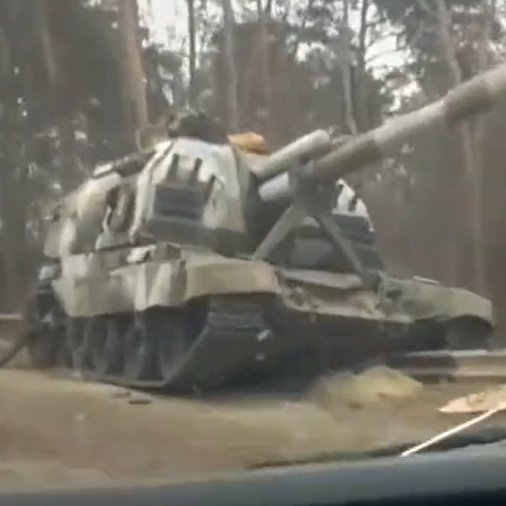 A Russian tank stuck in the middle of the road as it was headed to Kyiv. A Ukranian man asked the soldiers if they were broken down, but they said it had run out of gas. The Ukrainian man jokingly offered to tow them back to Russia.
Share:

Russian troops are struggling with logistical challenges and are stalled as they head toward Kyiv, the capital of Ukraine, a U.S. defense official said.

Satellite images from Monday show a Russian military convoy about 40 miles north of Kyiv. However, the move stalled as the troops struggled with shortages of food and fuel, while some military members appear to have low morale while fighting in Ukraine, Reuters reported.

Russia began its invasion of Ukraine six days ago but has made little progress in trying to take over the capital of Kyiv. While roughly 80 percent of Russian forces have entered the country, they’re moving much slower than anticipated and now face supply shortages, France 24 reported.

“One reason why things appear to be stalled north of Kyiv is that the Russians themselves are regrouping and rethinking and trying to adjust to the challenges that they’ve had,” said the U.S. defense official, according to Reuters.

Over the past several days, images and videos have appeared on social media showing what seem to be Russian tanks and other military vehicles stranded on the side of the road, some appearing to have run out of gas.

In one viral clip, a Ukrainian man filmed himself driving up to a Russian tank stuck in the middle of the road as it was headed to Kyiv. He asked the soldiers if they were broken down, but they said it had run out of gas. The Ukrainian man jokingly offered to tow them back to Russia.

“In many cases, what we’re seeing are columns that are literally out of gas,” the defense official said, according to France 24. “Now they’re starting to run out of food for their troops.”

Officials said they had independently picked up indications there were signs of Russian troops having morale problems. They provided no specific examples but hinted toward lack of preparation, logistical problems and challenges troops have endured, France 24 reported.

“Not all of them were apparently fully trained and prepared, or even aware that they were going to be sent into a combat operation,” an official said.

The U.S. saw some indication that Russian units had surrendered without fighting, the official said, but did not provide additional details about how many troops, France 24 added.

Despite the stalled convoy, the war continued. Several reports of shelling have been reported and President Volodymyr Zelensky called Russia a terrorist state following a missile attack in Freedom Square in Kharkiv, Ukraine’s second-largest city.

“This is terror against the city. There was no military target on the square. Just as those in residential areas of Kharkiv, hit by rocket artillery,” Zelensky said. “The attack on Kharkiv is a war crime. This is state terrorism of the Russian Federation. After that, Russia is a terrorist state.”

A cruise missile hit the city’s administration building, killing at least 10 people and injuring more than 20.