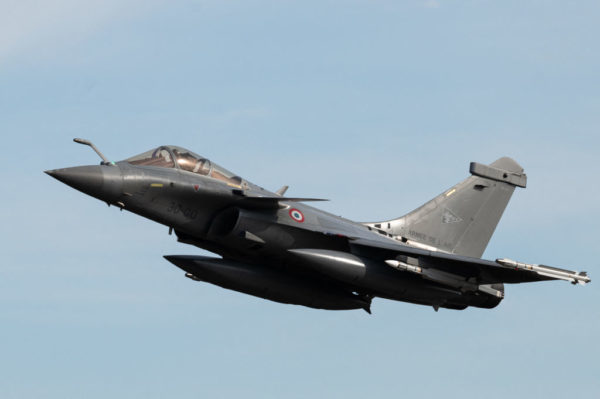 A French rafale fighter jet is takes off for a daily NATO border watch mission sortie over Poland at the Mont-de-Marsan airbase, southwestern France, on March 1, 2022. – As the war continues in Ukraine the Mont-de-Marsan air base has been flying Rafales daily to the eastern NATO borders for surveillance missions. (Photo by Philippe LOPEZ / AFP) (Photo by PHILIPPE LOPEZ/AFP via Getty Images)
Share:

This past week, it’s rumored that a pilot known as the “Ghost of Kyiv” defeated six Russian aircraft before being shot down and killed. If true, this makes him the first fighter ace of the 21st-century. His efforts, and those of pilots like him, have thus far unexpectedly denied Russia air superiority over Ukraine’s skies. If Ukraine is to prevail in this war, this air battle cannot be lost. Ukraine’s air forces are outmanned (they have far fewer pilots than Russia) and outclassed (their MiG-29s are a generation behind Russian fighter aircraft). This has led President Zelensky to call for a NATO-enforced no-fly zone over Ukraine, a request which will likely go unfulfilled as it could pit NATO and Russian aircraft against one another. However, there is a way to give Zelensky the air power he needs without pitting NATO aircraft against Russian ones—and it’s something the U.S. has done in the past.

In the early days of the Second World War, before the U.S. had committed to fight in Europe and the Pacific, the Lend Lease Act allowed us to arm our allies, such as the British and the Chinese while not becoming an active party to the war. American military pilots and ground crews were granted leaves of absence from their units to serve in squadrons like the Flying Tigers in China and in the “Eagle Squadrons” of the Royal Air Force. Indeed, some of America’s greatest fighter aces from the Second World War, pilots like Marine Major Gregory “Pappy” Boyington, scored their first kills flying aircraft that didn’t have U.S. markings. The efforts of these hundred-plus volunteer pilots helped hold back the tide of Axis aggression in theaters of war as far flung as the Japanese invasion of China and the Battle of Britain during the earliest, most fraught days of that war.

Despite its heroic initial resistance, the Ukrainian military finds itself in a precarious position. Although NATO-member nations have begun to discussthe transfer of dozens of planes to the Ukrainian air forces, when it comes to denying Russia air superiority, aircraft are only part of the equation. Anti-air systems like Stinger missiles, as well as command-and-control also play an essential role, but no air strategy can succeed without a healthy roster of pilots.

This past weekend, as negotiations around aircraft began, President Zelensky announced the formation of an International Brigade to fight in Ukraine. This program, which allows foreigners with military experience to enlist in Ukraine’s Territorial Defense Forces, is a wise move. However, NATO member nationsshould expand that effort. They should help Zelensky take it one step further by working with his defense ministry to create a program within their respective air forces that would grant pilots from NATO countries leaves of absence to fly in Ukraine.

Precedence abounds for such a program, not only in the Second World War but also the First, in which the Lafayette Escadrille, a squadron of American pilots flew for years in France before the U.S. formally entered the war in 1917. However, the greatest precedence for such a program might be in Russia’s current aggression toward Ukraine. When Russia first invaded Ukraine, in 2014, and seized the Crimean Peninsula, it did so with its “little green men.” These soldiers wore no markings on their uniforms. They claimed no affiliation with the Russian Federation. And they masqueraded as “self-defense groups.” Only later, after Russia’s successful annexation of the Crimea, did the Kremlin concede they were members of Russian airborne and Spetsnaz units.

Provoking a nuclear-armed Russia and a seemingly unhinged Putin is certainly a concern worth weighing, but a flight exchange program plays Russia’s strategy of “little green men” back at it, except in this case it will be the “little blue men” of the free world who will take to the skies over Ukraine. Additionally, these volunteer pilots would fly aircraft with Ukrainian markings and should be granted dual Ukrainian citizenship so that in the event they are shot down, the political fallout is mitigated. A downed Ukrainian pilot flying a Ukrainian aircraft is a lesser cause for outrage—particularly given Russia’s behavior of the past week—than a NATO aircraft flying the same mission. As for the numbers, from my own experience among pilots, an announcement in any fighter squadron’s ready room would likely yield all the volunteers President Zelensky would need.

Although Putin has failed to meet many of his initial military objectives, one thing he has succeeded at is surprising the world through his appetite for sheer naked aggression. It’s time to surprise him back, and a program of volunteer pilots isn’t something Putin is expecting. He has embarked upon a war of choice by invading Ukraine. His war of choice has presented NATO and the free world with a war of necessity. And, as they say, necessity is the mother of invention. It’s time for us to get inventive. We’ve done it before.