Biden announces ban on Russian flights in US airspace, video 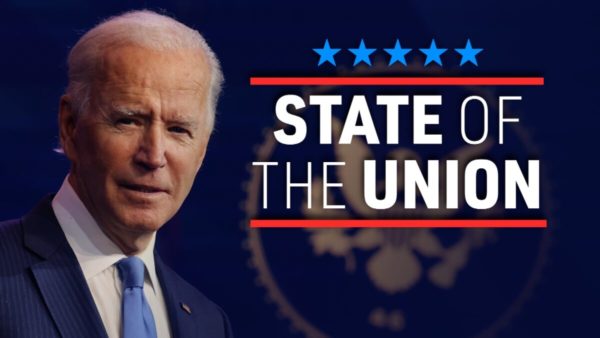 Russian forces are continuing their attempted push through Ukraine from multiple directions, while Ukrainians, led by President Volodymr Zelenskyy, are putting up “stiff resistance,” according to U.S. officials.

Russians moving from Belarus towards Ukraine’s capital, Kyiv, don’t appear to have advanced closer towards the city since coming within about 20 miles, although smaller advanced groups have been fighting gun battles with Ukrainian forces inside the capital since at least Friday.

Russia has been met by sanctions from the U.S., Canada and countries throughout Europe, targeting Russia’s economy and Putin himself.

In his first State of the Union address, President Joe Biden began by discussing the war in Eastern Europe and condemning Russian President Vladimir Putin’s invasion of Ukraine.

Biden invoked the strength of the Ukrainian people amid the attack, lauding the civilians who took up arms to defend their country and highlighting the work Ukrainian Ambassador to the U.S. Oksana Markarova has done on behalf of her people.

Many lawmakers in attendance showed their support for Ukraine by wearing color-coordinated outfits and lapel pins in blue and yellow.

Biden described the invasion as “premeditated and totally unprovoked,” vowing, alongside NATO allies, to hold Putin accountable with sanctions on the Russian economy and Putin and the oligarchs themselves.

“When dictators do not pay a price for their aggressions, they cause more chaos,” Biden said. “They keep moving.”

Biden announced that American airspace would be closed to all Russian flights and pledged $1 billion in direct assistance to help “ease suffering” in Ukraine.

Biden announced that American airspace would be closed to all Russian flights and pledged $1 billion in direct assistance to help “ease suffering” in Ukraine.

The president also “made clear” that while American forces would not go fight in Ukraine, he has mobilized the military to protect NATO countries.

“The United States and our Allies will defend every inch of territory that is NATO territory with the full force of our collective power,” he said.

Lawmakers working to court ambassadors, diplomats ahead of UN vote to condemn Russia

While all eyes in Washington are on President Joe Biden’s State of the Union address, some lawmakers have been working the phones to rally support at the United Nations for a resolution before the General Assembly to condemn Russia’s invasion of Ukraine and call for a peaceful resolution.

Working with the United States Mission to the United Nations, Democrats on the House Foreign Affairs Committee have identified more than a dozen countries to target and called for ambassadors and key diplomats to leverage relationships to build more support for the nonbinding resolution.

“This has been a way for Congress to really play an important role working with the executive branch in getting this done and showing the world that Russia’s actions are illegal and should be condemned,” Rep. Joaquin Castro, D-Texas, a senior member of the committee that is leading the effort, told ABC News.

The vote “is an opportunity for countries to take a stand, and it’s especially a chance for the United States to demonstrate leadership among the nations of the world,” he said.

“President Biden and his administration, and now Congress, I believe, have demonstrated our ability to marshal our allies to condemn something the world has worked for decades to root out — which is a sovereign nation invading another.”

Republicans have also been working to build support for the measure in the General Assembly, Castro said.