“Prove you are with us “: Zelensky tells EU leaders after Ukraine applied to join EU 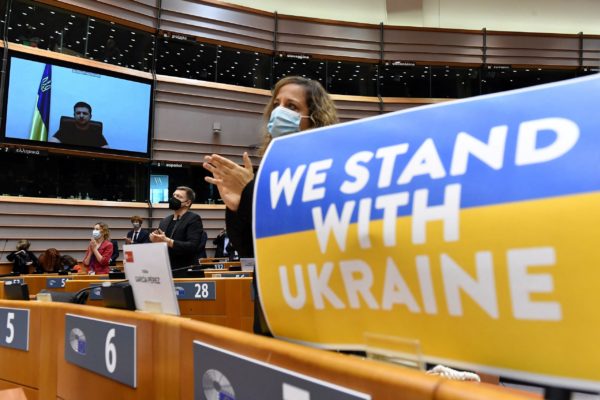 Members of the European Parliament applaud Ukrainian President Volodymyr Zelensky who appears on a screen as he speaks in a video conference during a special plenary session of the European Parliament focused on the Russian invasion of Ukraine at the EU headquarters in Brussels, on March 01, 2022. – The European Commission has opened the door for Ukraine to join the EU, but this is not for tomorrow, despite Kiev’s request for a special procedure to integrate the country “without delay”. (Photo by JOHN THYS / AFP) (Photo by JOHN THYS/AFP via Getty Images)
Share:

Ukrainian President Volodymyr Zelensky has called on European leaders to “prove” their solidarity with his country, just a day after signing an official request to join the European Union.

Zelensky said his country is “fighting for survival” amid the Russian invasion.

“Then, life will win over death and light will win over darkness,” he continued. “We are fighting for survival — this is the highest of our motivations — but we are also fighting to be equal members of Europe.”

Tweeting on Tuesday, Ukrainian Foreign Minister Dmytro Kuleba said that the “best decision the EU can make now is to accept Ukraine as a new full-fledged member” of the organization.

“Historic times require big and historic decisions which can change the flow of events,” he added, urging EU leaders to admit Ukraine to the bloc “without delay.”

Addressing the European Parliament via video link, Zelensky stressed that the Ukrainian people are fighting for their lives, urging EU leaders to stand by Ukraine amid Russia’s ongoing invasion.

“We are dealing with real people, real lives. We are giving our lives for our values, our rights, our freedom, for the desire to be equals — as much as you are,” Zelensky said.

“Nobody is going to break us. We are strong. We are Ukrainians,” he added.