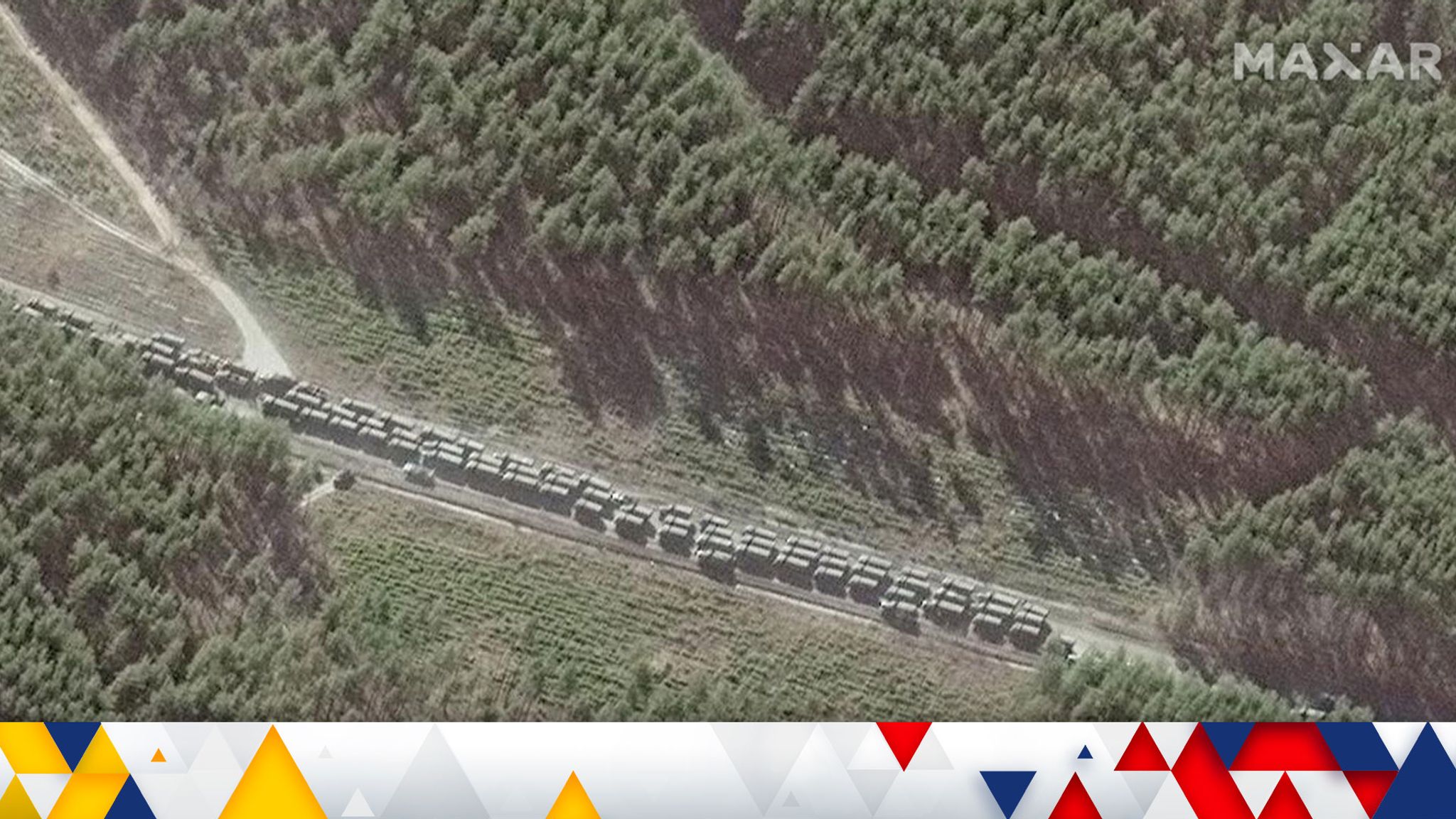 A 40 mile ( 64 KM) convoy of hundreds of Russian tanks and other vehicles, is nearing Kyiv in an apparent attempt to seize the Ukrainian capital and install a pro-Kremlin regime, the Associated Press reported on Tuesday.
Share:

A convoy of hundreds of Russian tanks and other vehicles, stretching 40 miles, is nearing Kyiv in an apparent attempt to seize the Ukrainian capital and install a pro-Kremlin regime, the Associated Press reported on Tuesday.

Meanwhile, a Russian military strike on Ukraine’s second-largest city Tuesday left at least six dead and at least 20 injured, according to the Associated Press. It wasn’t immediately clear what type of weapon was used to cause a massive explosion at Kharkiv’s Freedom Square, leaving buildings badly damaged and debris and ash covering the street, though Ukrainian President Volodymyr Zelenskyy later clarified it was a cruise missile strike. Freedom Square, previously named for Soviet and Nazi officials, was renamed after Ukraine won its independence.

Zelenskyy, who continues to join his country’s defenders in bunkers and on the streets, called the attack “frank, undisguised terror.”

A second missile attack struck the TV tower in Kyiv and the country’s main Holocaust memorial, just miles from the city’s center. The strikes killed five Ukrainians and wounded five others, the Associated Press reported.

The Holocaust memorial, Babi Yar, is the site of a 1941 massacre where 34,000 Jews were killed in just 48 hours while the city was under Nazi occupation. One of Putin’s stated goals of his unprovoked attack on Ukraine is the “de-Nazification” of the country, which is led by Zelenskyy, who is Jewish.

As the Russian convoy approached the capital Tuesday, Zelenskyy appointed Gen. Mykola Zhyrnov to lead the defense of Kyiv. Zhyrnov, a military commander, will work with the city’s elected mayor, Vitaly Klitschko, a former heavyweight boxing champion, on the city’s defense.

“I decided to appoint a professional military man as the head of the Kyiv city military administration for the duration of the war,” Zelenskyy said. “To guarantee the defense of the city, to block the enemy’s intrigues in our capital, so that the people of Kyiv have all that they need.”

Zelenskyy also spoke with President Joe Biden on Tuesday, the Ukrainian president announced on Twitter. “The American leadership on anti-Russian sanctions and defense assistance to Ukraine was discussed,” Zelenskyy tweeted. “We must stop the aggressor as soon as possible. Thank you for your support!”

The U.S., in conjunction with fellow International Energy Agency Member states, announced a plan to release 60 million barrels of crude oil from existing petroleum reserves. 30 million of those barrels will come from the U.S. Strategic Petroleum Reserve, the White House announced Tuesday.

“We are prepared to use every tool available to us to limit disruption to global energy supply as a result of President Putin’s actions,” White House press secretary Jen Psaki said in a statement. “We will also continue our efforts to accelerate diversification of energy supplies away from Russia and to secure the world from Moscow’s weaponization of oil and gas.”

Addressing the European Union in a plea for his nation to be granted membership in the bloc on an emergency basis, Zelenskyy said that “thousands of people who were killed, two revolutions, one war and five days of full-scale invasion of the Russian Federation” is a “very high price” to pay to access EU membership.

Russian forces attacked other cities across the Ukraine on Tuesday, including at or near the strategic ports of Odesa and Mariupol in the south, according to the Associated Press. BBC reported that Russian forces are advancing from Crimea, which Moscow invaded and annexed in 2014, moving northeast and northwest. The Russian defense ministry said those troops merged with Russian soldiers in the breakaway region of Donbas and cut off Ukraine’s access to the Sea of Azov.

Negotiators from Ukraine and Russia met at the Belarus border Monday, and though no agreement to cease fighting was reached, the two parties agreed to another meeting. No date has been set for that second meeting. Vladimir Medinsky, who headed the Russian delegation, said Monday’s meeting lasted nearly five hours and that the envoys “found certain points on which common positions could be foreseen,” according to the Associated Press.

“Belarusian troops have entered Chernihiv region. The information was confirmed to the public by Vitaliy Kyrylov, spokesman for the North Territorial Defense Forces. More details later,” the tweet said.

Belarus President Alexander Lukashenko, a close ally of Putin, pushed last week to alter the Belarusian constitution and end its status as a nuclear-free zone. The U.S. closed its embassy in Minsk, Belarus Monday.