It’s Time for Putin to Go 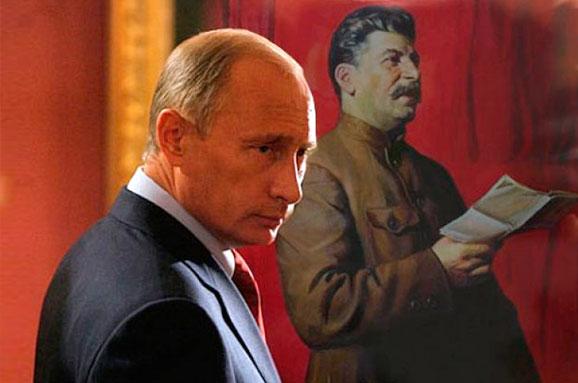 The Biden administration must implement policies leading to regime change in Russia.

Short-term, the United States and the Free World must strongly support Ukraine’s resistance with severe sanctions against Russia, and weapons and money for Ukraine. Russia must pay dearly for its aggression.

Long-term, the West must undermine the four pillars of Vladimir Putin’s power: the energy industry, the military, his gang of oligarchs, and his propaganda machine.

Through these policies, the United States and the Free World would be helping the Russian people remove Putin, his regime, and his gang of oligarchs from power. They are a threat to the world and to Russia.

Through this unprovoked invasion, Putin and his dictatorial regime have committed war crimes by bringing death and destruction upon the peaceful people of Ukraine and by targeting for assassination the democratically elected leaders of Ukraine. Furthermore, Putin has threatened nuclear attacks on countries that help Ukraine defend itself.

Putin’s speeches related to the Ukraine invasion have been strange and cause to question his grip on reality.

And Ukraine is not the only aggression Putin is considering. He wants Russia to subjugate again countries formerly controlled by Soviet Russia in Eastern and Central Europe that after the Cold War have chosen democracy, free markets, and membership in NATO and the European Union. An attack against these countries would provoke a war with NATO and thereby with the United States, causing even greater loss of life and destruction.

As we consider the seriousness and urgency of the responses that must come from the United States and the Free World to Putin’s naked aggression, we must keep in mind Putin’s one-and-only important ally: Xi Jinping. Like Putin, Xi is a dictator for life, has been bullying his neighbors, and has his own plans of invading neighboring democracies. Some of Xi’s aggressive plans involve countries the United States has promised to defend and may draw the United States into combat.

Russian reverses on the Ukrainian battlefield will be hard on Putin. Historically, the Russian people and its power brokers have been harsh with leaders who led them to defeat. Russia’s humiliation in the 1905 Russo-Japanese war led to the first Russian revolution and its defeats in the First World War to the 1917 Revolution and the execution of the tzar and his family. Soviet Russia’s retreat in the 1960’s Cuban Missile Crisis led to the toppling of Communist Party leader Nikita Khrushchev, and the defeat in Afghanistan in 1989 was one of the causes of the collapse of the Soviet Union and the ouster of Mikhail Gorbachev.

Long-term, the United States and the Free World must weaken Putin’s four pillars of power.

First, target Russia’s energy industry which accounts for 50 percent of the federal budget and is critical for financing the military. Sanctions against Russian banks are helpful because banks finance the energy industry. But much greater effect would be derived from driving down world energy prices by increasing American production. Lower energy prices make Putin poorer and less dangerous—and America stronger.

The key here is to unshackle America’s energy industry. Earlier this century, fracking and other revolutionary exploration technologies have turned the United States from a net importer to a net exporter of energy and into the largest energy producer in the world.

But because of its climate change priorities, the Biden administration has been pursuing policies unfriendly to the energy industry, for example by denying leases for new oil and gas exploration and production.

Renewable forms of energy, the preference of the Biden administration, are only about 13 percent of today’s energy mix and will not replace fossil fuel anytime soon. They should be encouraged, along with nuclear energy. But what we need today is more U.S. fossil fuel energy exploration and production to push down world energy prices and weaken Putin. Oil prices have doubled over the last year, and this gives Putin more money to finance his wars.

Natural gas, one of the cleanest forms of energy, is particularly important because it can be converted into Liquified Natural Gas (LNG) and transported to Europe to reduce the continent’s vulnerability to Russian energy imports.

The United States is importing about 8 percent of its oil from Russia and 50 percent from Canada. President Joe Biden has also discouraged imports from Canada by withdrawing the permit for the Keystone Pipeline, before appealing to the Organization of the Petroleum Exporting Countries to increase their production to counter rising prices.

There is an extra bonus to this proposed energy policy: It reduces inflation which has risen over the past year to its highest level in forty years. Inflation is a tax on all Americans and usually leads to recessions.

Encouraging fossil fuel energy production would be a big policy change for the Biden administration and would require political courage. But Germany’s governing coalition that includes the Green Party and has been strongly for renewables has shown that it can be done. In a dramatic political U-turn during a special Bundestag session on Sunday, Chancellor Olaf Scholz announced major policy changes to reduce Germany’s dependence on Russian gas. In a departure from past policies, Germany will build two LNG terminals and increase its natural gas reserves. It is also reconsidering plans to shut down nuclear and coal-fired power plants. And he halted the certification of the Nord Stream II gas pipeline from Russia.

Second, challenge Putin’s military pillar. The United States, NATO, and Japan must increase their military budgets and confront Putin and his generals with overwhelming odds were they to engage in further military adventurism.

The Biden administration must ask Congress for an increase in America’s military budget and spend the new money on the emerging defense technologies of the twenty-first century, such as artificial intelligence and quantum computing.

We are in Cold War 2.0, but we have a post-Cold War budget. America’s defense budget was 37 percent during World War II, 7 percent during the Cold War, and 4 percent during the War on Terror. Today it is 3 percent. An increase back to 4 percent would represent an additional $200 billion to respond to the threats of the new security environment and to counter our rising inflation.

President Ronald Reagan forced Soviet Russia into an arms race that Russia clearly lost in the late 1980s—one of the causes of the Soviet Union’s bankruptcy and disintegration. Today’s Russia would fare even worse.

Russia is a technologically middling country of 140 million people, and with a GDP of $1.5 trillion (less than Texas’ GDP and a little more than Spain’s). It is no match for a resolute NATO with cutting-edge technology, a population of 940 million and a GDP of $42 trillion.

The United States must also ask its Free World allies and partners to increase their military budgets. This is never popular in any country, but political leaders must rise to this occasion. Too many NATO countries are not meeting their promise to spend 2 percent of their GDP on defense.

On this matter as well, Chancellor Scholz’ speech on Sunday offers hope for decisive action. Years of financial neglect after the end of the Cold War have seen Germany’s military atrophy: Since 1989, Germany has reduced its number of troops from 300,000 to 180,000, its tanks from 4,700 to 300, and its warplanes from 390 to 230.

But on Sunday, Scholz announced that “With the invasion of Ukraine, we are in a new era.” Germany will spend $113 billion this year to modernize the military and that “from now on – year after year – (we will) invest more than two percent of gross domestic product in our defense,”

Third, target Putin’s political pillar—his gang of oligarchs. These multi-billionaires got rich through theft of epic proportions with the support of Putin and the rest of the government. They should be targeted by name, have their foreign assets frozen, and they and their families should be prevented from traveling to the Free World. They may then reconsider their support for Putin.

A good place to start is the “Navalny 35” list of corrupt oligarchs compiled by the Moscow-based Anti-Corruption Foundation led by political prisoner Alexei Navalny. They sent the list to President Biden a week after he was inaugurated.

Fourth, topple Putin’s propaganda pillar. Putin has absolute control over Russian media and uses it to spread his propaganda. Journalists who challenge him see their papers closed and they may be imprisoned or murdered. The Internet is censored, and anyone engaged in public demonstrations risks years in prison. The Russian people do not have access to independent information.

These actions are meant to empower Russians to topple Putin in the hope that the next Russian leader will serve his people better and engage peacefully with other countries. The goal is to safeguard the world’s freedom and peace in this time of great peril.

Dan Negrea is a senior fellow at the Atlantic Council’s Scowcroft Center for Strategy and Security. Between 2018 and 2021, he served at the Department of State in the Secretary’s Policy Planning Office and as the Special Representative for Commercial and Business Affairs.