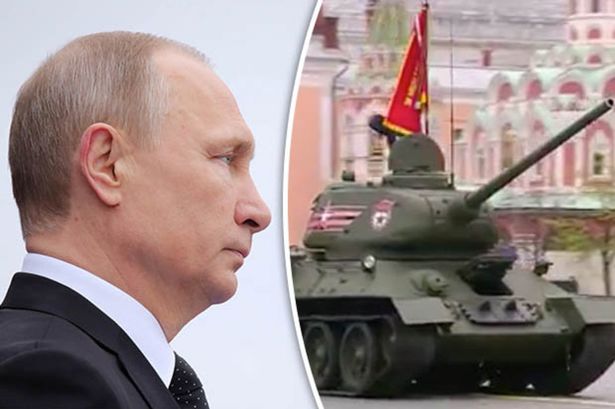 By JIMMY MCCLOSKEY FOR DAILYMAIL.COM and WILL STEWART IN MOSCOW

Russian missiles have hit a nuclear waste disposal site outside of Kyiv – and destroyed the equipment that can detect leaks of radioactive material, as it was revealed that at least 240 Ukrainian civilians have been killed.

A chilling update shared by Ukrainian news website BNO Sunday said: ‘As a result of the mass bombing of Kyiv with all types of anti-aircraft and missile weapons available to the Russian Federation, the missiles that hit the radioactive waste disposal site of the Kyiv Branch of the State Specialized enterprise ‘Radon.’

BNO claimed that there was ‘no evidence of a leak’, but then elaborated by saying that ‘the automated radiation monitoring system failed’ – meaning that dangerous nuclear material could well have been spilled.

The statement the outlet shared said that a ‘preliminary assessment’ showed there was ‘no threat of radioactive’ exposure to people outside the immediate vicinity, with a further examination set to take place when the area is made safe.

The blast came as two Ukrainian cities were rocked by Russian blasts in the early hours of Sunday as Vladimir Putin stepped up his invasion – after it was claimed he has been infuriated by his army’s lack of progress.

And the UN released the first official death toll Sunday, saying that at least 240 civilians have so-far been killed in the conflict. On Saturday night, an unidentified woman became the latest victim of the conflict after a Russian artillery shell struck a nine-story residential apartment block in Kharkiv, killing her as she sat inside.

Local newspaper The Kyiv Independent wrote that an oil depot had been blown up at Vasylkiv Air Base. The city which sits around 40 kilometers south west of Kyiv, close to a key airport. A gas pipeline was also blown up in Kharkiv, a city in eastern Ukraine which sits close to the Russian border.

Video footage showed a mushroom cloud fill the city’s sky as the fuel line was destroyed, with a group of people who filmed the clip heard exclaiming with shock as the ball of flames erupted into the sky. It is unclear if anyone was injured or killed by either blast.

Ukrainian TV station Nexta shared footage of flames and black clouds billowing into the sky at the site of the Vasylkiv attack as the fuel burned.  It has also since shared a clip of the moment the oil depot was struck, with a bright white glow filling the darkened night sky as the fuel store ignited.

People as far away as Kyiv have since been urged to keep their windows shut to protect them from potentially harmful fumes released by the explosion and subsequent inferno.

Russia was widely-expected to step-up its attacks on Ukrainian infrastructure in a bid to try and cower locals into submission.

Forces have been met with far greater resistance than the Kremlin is said to have expected, sparking reports that Putin has been angered that locals have not capitulated to the might of his armed forces as quickly as expected.

Elon Musk risked aggravating the Russian autocrat further Saturday, after answered a plea from Ukraine’s vice prime minister Mykhailo Fedorov to switch on his Starlink satellites over the country. That means locals will still be able to use the internet if Russia destroys the country’s telecommunications network.

Ukrainians are particularly keen to push back against Russian propaganda and lies about the atrocities being inflicted by Putin and his troops.

President Volodymyr Zelensky has so-far managed to avoid Russian kill squads deployed to capture and assassinate him, and shared updates earlier on Saturday vowing to fight on, having previously conceded he was unlikely to survive the conflict when it inevitably intensifies.

The Vasylkiv blasts – said to have been triggered by Russian ballistic missiles – filled the skies over Kyiv with an eerie orange glow in the early hours of Sunday morning.  It is unclear if anyone was injured or killed in the explosion.

The explosions were first reported by CNN and stuck close to the Ukrainian capital’s secondary airport, Boryspil International. They took place around 15 minutes apart, and set of car alarms miles from the explosion epicenter.

Vasylkiv mayor Natalia Balasynovych told the Independent that her city and its airfield sustained heavy shelling from ballistic missiles. She said: ‘The enemy wants to destroy everything around, but he will not succeed. Hold on!’

She later recorded a Facebook message for locals, saying: ‘You can see what is going on, you can see the fire – unfortunately, this is the petroleum storage depot in Kriachky village.

‘The enemy wants to destroy everything around, but he will not be successful. You’ve seen that during the day there was heavy shelling from ballistic missiles. Our airfield was shelled as well, but we got it, it’s under control of Ukraine.

‘The night will be difficult here, as well as in Kyiv, but we will stand our ground and we will win, because God is with us.’

Vasylkiv had suffered heavy Russian bombardment in the early hours of Saturday, as Russian troops fought to try and seize control of a key strategic staging post on the road to Kyiv.

Kyiv’s 2.9 million citizens face another night of terror as it was claimed Russia will step up its bombardment on Saturday night, and target commercial businesses in a bid to destroy Ukrainian morale.

Many have fled to underground shelters in a bid to stay safe, although other men and women have taken to the streets with weapons in a bid to fend off any Russian advance.

BNO News also shared footage of heavy shelling in Kharkiv in eastern Ukraine, with the night sky there lit up by the orange glow of explosions.

Donald Trump – who touted his close relationship with Vladimir Putin while he was president – condemned the attack while speaking at the CPAC conservative conference in Florida Saturday night.

Trump said: ‘The Russian attack on Ukraine is appalling, it’s an outrage and an atrocity that should never have been allowed to occur. It never would have occurred. We are praying for the proud people of Ukraine. God bless them all.’