Biden instructs State Department to release up to $350 million assistance to Ukraine , update 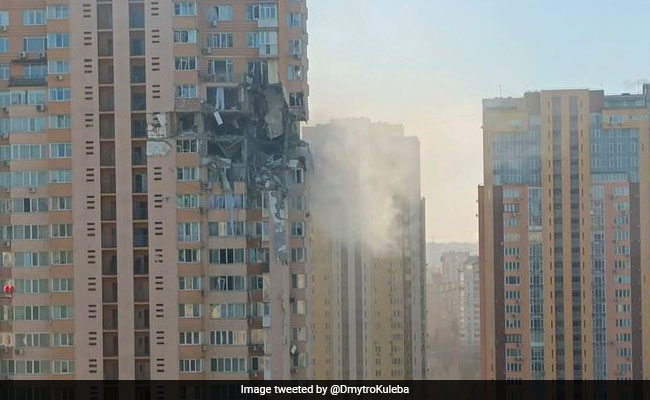 A high-rise apartment block was hit by a Russian missile overnight in Kyiv as fighting raged between Russian attackers and Ukrainian forces, officials said Saturday.
Share:

United States President Joe Biden has instructed Secretary of State Antony Blinken to release up to $350 million in immediate support to Ukraine’s security and defense, according to a new memo released by the White House late Friday.

This is the third drawdown of money; previous orders have been for $60 million and $250 million, putting the total over the last year at over a billion dollars, according to an administration official.

The State Department is expected to issue its own statement with more details shortly.

This release comes after a 40-minute call between Biden and Ukrainian President Volodymyr Zelensky earlier Friday, during which they discussed “concrete defense assistance.”

Residents in the Ukrainian capital Kyiv are waking up to explosions and the sounds of war for the third morning, as the battle arrives in the city proper. Here’s the latest:

Russian missile strike last night on an apartment block in Lobanovsky Avenue in central Kyiv. A large chunk torn out of the building, with multiple floors destroyed and smoke burning this morning. Number of casualties unknown pic.twitter.com/bkJ07QdiOT

The Ukrainian military has given its first account of explosions that rocked western Kyiv in the early hours of Saturday morning.

The Military Law Enforcement Service of Ukraine said that country’s the military “destroyed a column of equipment of the occupiers” in the Beresteiska district in Kyiv.

The United Kingdom supplied NLAW anti-tank missiles to Ukraine in the weeks before Russia invaded.

Several bursts of gunfire were heard in the Ukrainian capital Kyiv, close to the city center around 5:45 a.m. local time Saturday (10:45 p.m. ET Friday). It appeared to come from the southeast.

It came after a quiet lull that lasted around 45 minutes — a break from the explosions seen and heard in and around Kyiv throughout the night.

Earlier Saturday between 2 to 4 a.m., CNN teams reported hearing loud explosions to the west and south of the city, with the sky lit up with a series of flashes. Shortly after, videos from eyewitnesses showed explosions to the city’s northwest.

As Ukrainian leaders urge residents to stand their ground and resist Russia’s invasion, one television channel broadcast instructions on how to make Molotov cocktails on Friday.

The TV segment showed a person creating the makeshift explosive, pouring colored liquid into a glass bottle, with a diagram on the side showing how to stopper the bottle with a cloth wick.

Earlier Friday, the Ukrainian Defense Ministry tweeted that citizens should “make Molotov cocktails and take down the occupier,” as Russian forces drew closer to the capital Kyiv.

Learn how to shoot the Russian soldiers , MP

Kira Rudik, a member of Ukraine’s parliament, had been going about daily life just a few days ago, holding meetings and discussing legislation even as the threat of a Russian invasion loomed.

Rudik posted a photo of herself holding a gun on Twitter late Friday, captioned: “Our women will protect our soil the same way as our men.” The post has since circulated widely online, with more than 91,000 likes on Twitter.

“It was super unusual and super crazy for myself to understand and realize that I’m holding a gun and I’m ready to bear arms, and I’m ready to go and shoot other human beings,” Rudik said early Saturday. “And the reason for that change was because Russian soldiers are coming to Kyiv and Russian soldiers are trying to take what is actually not theirs.”

She and her family are now hiding in a bomb shelter as heavy fighting intensifies, with explosions heard and seen in the city in the early hours of Saturday.

But, she added, “We are actually fighting them very, very hard … (Putin) underestimated the readiness of our army, and he underestimated that on every step of the way of his soldiers, they were given really hard resistance.”

I learn to use #Kalashnikov and prepare to bear arms. It sounds surreal as just a few days ago it would never come to my mind. Our #women will protect our soil the same way as our #men. Go #Ukraine! 🇺🇦 pic.twitter.com/UbF4JRGlcy

Parts of Ukraine Russian forces have occupied so far

“We are working to establish a special international court” in charge of prosecuting and judging “those involved in war crimes in the Ukrainian theater” in the future. British Prime Minister Boris Johnson said this in response to a deputy during the debate following the House of Commons to his speech today on the military action undertaken by Vladimir Putin’s Russia in Ukraine

The European Union, U.S. and other Western allies reached an agreement on Saturday to disconnect select Russian banks from the SWIFT international payments system and impose restrictions on Russia’s Central Bank.