Lebanon was orphaned: Jumblatt said after Hariri’s withdrawal from politics 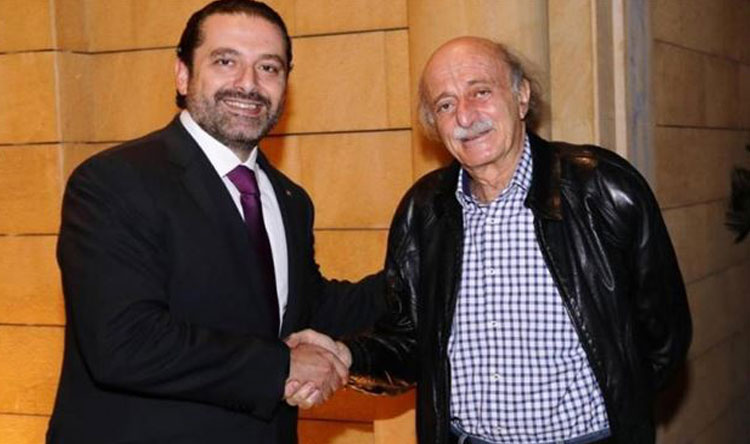 FILE PHOTO of former Prime Minister Saad Hariri and Progressive Socialist Party leader Walid Jumblatt Feb 2, 2019. Jumblatt on Monday said that Hariri’s decision to withdraw would give Hezbollah and the Iranians the upper hand, adding that “the decision is very saddening.” Jumblatt headed a delegation on Sunday to Hariri’s residence and tried for a long time to convince Hariri not to quit but couldn’t
Share:

“Mukhtara is sad and lonely,” he added ( in reference to his hometown) in a tweet, to which he included photos of the small Chouf town covered in snow.

The tweet came right after Hariri announced his withdrawal from politics, in a televised address.

In a televised speech , Hariri said on Monday he was stepping back from political life and would not run in the parliamentary election, turning Lebanon’s sectarian politics on its head as the country grapples with a financial crisis. He blames Hezbollah and Iranian influence for his decision .

“There is no hope for any positive chance for Lebanon amid the Iranian influence and international confusion,” Hariri said, with tears in his eyes

In the televised speech he was shown standing in front of portrait of his father former Lebanese Prime Minister Rafik Hariri who was assassinated by a Hezbollah operative on Valantine day February 14, 2005 .

Jumblat later claimed in a press interview expressed concern that Hariri’s decision would give Hezbollah and the Iranians the upper hand, adding that “the decision is very saddening.”

“We are losing a pillar for independence and moderation,” the PSP leader added

Irreplaceable as the Sunni leader

Similarly Future bloc member MP Muhammad Al-Hajjar expressed sadness over Hariri’s withdrawal . Asked whether Baha Hariri ( Saad’s older brother) will be inheriting Saad’s , Hajjar said , “I do not think that anyone can inherit Saad Hariri”, and “everyone should understand the message ” that Hariri sent today.