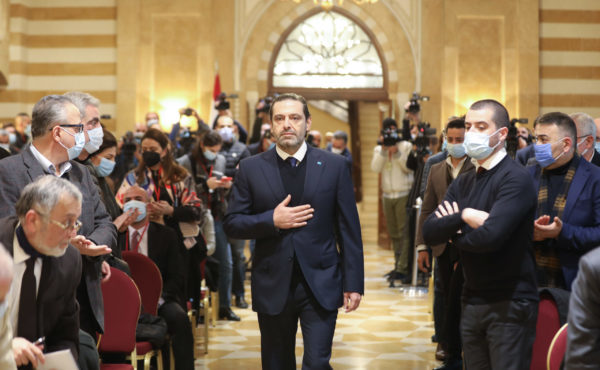 Former Lebanese Prime Minister , Saad al-Hariri said on Monday he was stepping back from political life and would not run in the parliamentary election, turning Lebanon’s sectarian politics on its head as the country grapples with a financial crisis. He blames Hezbollah and Iranian influence for his decision . Hariri who remains the most popular Sunni leader said he made compromises to avoid a civil war in Lebanon . His father former Lebanese Prime Minister Rafik Hariri was assassinated by a Hezbollah operative on Valantine day, February 14, 2005 . He is shown here among his supporters prior to delivering his televised speech . Jan 24, 2022 photo courtesy Dalati and Nohra
Share:

BEIRUT (Reuters) -Lebanon’s leading Sunni Muslim politician Saad al-Hariri said on Monday he would not run in a forthcoming parliamentary election and was suspending his role in political life, urging his political party to do the same.

Hariri https://www.reuters.com/world/middle-east/lebanons-hariri-expected-announce-election-boycott-party-members-say-2022-01-24 has served three times as prime minister, but his political fortunes have waned in recent years, with his position weakened by the loss of Saudi support.

* Hariri, 51, inherited the political mantle of his father, Rafik, after his assassination in 2005, becoming the leading Sunni Muslim in Lebanon’s sectarian politics. In 2020, a U.N.-backed tribunal convicted a member of the heavily armed, Iran-backed Shi’ite group Hezbollah of conspiring to kill Rafik al-Hariri. Hezbollah denies any involvement.

* His early years in politics were defined by his close alliance with Saudi Arabia and confrontation with Lebanese allies of Syria and Iran, chief among them Hezbollah. He led a Western-backed Lebanese alliance called “March 14”. Tensions spilled into a brief armed conflict in 2008, during which Hezbollah took over Beirut.

* He formed and led his first coalition government in 2009 after March 14 won a parliamentary majority.

* That cabinet was toppled in 2011 when Hezbollah and its allies quit over tensions linked to the U.N.-backed tribunal. For several years, he mostly stayed outside Lebanon on security grounds. He was strongly critical of Hezbollah’s role fighting in support of Syrian President Bashar al-Assad.

* Having led opposition to Hezbollah’s arsenal for years, Hariri was widely seen to set the issue aside as he began to make political understandings with Hezbollah and some of its allies. This resulted in a deal in 2016 that made the Hezbollah-allied Christian politician Michel Aoun president, with Hariri becoming prime minister for a second time.

* While continuing to oppose Hezbollah’s possession of arms, Hariri described the arsenal as a regional matter bigger than Lebanon, where he said the focus should be on tackling economic problems. Anti-Hezbollah hawks accused him of compromises and abandoning the principles of March 14.

* His political network in Lebanon, including media outlets, began suffering a financial crisis around 2015. This was a sign of the collapsing fortunes of Hariri’s Saudi-based construction firm Saudi Oger, the source of the wealth that helped make Rafik al-Hariri Lebanon’s leading Sunni after the 1975-90 civil war.

* The strains in Hariri’s ties with Saudi Arabia, which analysts believe was angered by his compromises in Lebanon, surfaced in 2017 when he was held while on a visit to the kingdom and forced to declare his resignation. Though Riyadh and Hariri deny this, the incident was widely reported. French President Emmanuel Macron, who mediated an end to the crisis, has said Hariri was held. Hariri returned to Beirut and retracted his resignation.

* Financially weakened, Hariri’s Future Movement lost more than a third of its seats in a 2018 parliamentary election. But he remained the biggest Sunni player, and led another coalition cabinet.

* His last spell as prime minister ended in 2019 when Hariri resigned in response to mass protests against the ruling elite, which erupted as Lebanon sank into financial crisis. Hariri’s ties with Aoun soured badly, and Hariri wanted Aoun’s son-in-law, Gebran Bassil, and other leading politicians removed in a government reshuffle, to be replaced with technocrats. Hariri and Bassil blamed each other for obstructing reforms that could have averted the financial crisis.