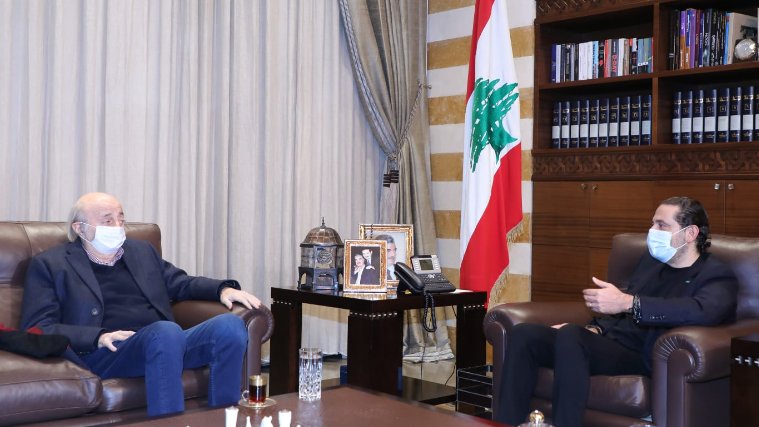 Hariri reportedly maintained his position to abstain from participating in the upcoming May parliamentary elections. He will explain his position in full details on Monday.
Al-Jadeed confirmed that, during the meeting, Jumblatt was keen on Hariri’s participation in the elections in order to preserve balances and the Taif Agreement and what he and the Future Movement represented in the Sunni and national arena, but he could not convince him of his point of view.

Hariri has told his Future Movement parliamentary bloc and its political bureau that he has decided not to take part in the upcoming parliamentary elections — neither in person nor as a political movement, media reports said on Saturday.

Referring to the meetings that Hariri held on Friday, Future Movement sources told al-Joumhouria newspaper that the ex-PM “demonstrated the political scene in general, stopping at the disastrous impact on the economic and financial situations due to the policies adopted by the current presidential tenure.”

“Hariri stressed to the conferees clearly and frankly that he has decided not to take part at all in the elections, neither in person nor through his political movement,” the sources added.

“Some expressed their rejection of this decision as others expressed their fears, insisting that he should stay in this race. Hariri, however, underlined his insistence on the matter and told them that it is final and irreversible,” the sources revealed.

The sources added that Hariri told the conferees that he would not endorse any candidate and that those wishing to nominate themselves can do so in their personal capacity.

Hariri is scheduled to hold another meeting with his bloc on Monday, after which he would officially announce the reasons behind his decision of not participating in the upcoming elections.

Speaker Nabih Berri is also exerting efforts with Hariri through his political aide MP Ali Hassan Khalil, stressing the importance of “ex-PM Hariri and his political movement’s representation, both on the Sunni level and on the general political level,” al-Joumhouria said.

Al-Joumhouria also reported that in addition to Jumblatt , Speaker Nabih Berri is also exerting efforts with Hariri through his political aide MP Ali Hassan Khalil to convince him and his movement to participate in the upcoming election

The results of an opinion polls conducted by the Regional Foresight Center for Information in a number of Sunni areas (Bekaa, Sidon, Beirut, Tripoli), regarding the political choices of Sunni Muslims, showed that Hariri is the most popular Sunni leader who enjoys broad popular support of at least 35% in every region, with the exception of Tripoli, where Prime Minister Najib Mikati ranked first in popularity, followed by Hariri’s “Future Movement”, while the October 17 uprising movement received acceptable proportions.

What is remarkable about the results is that Hariri’s brother Bahaa remains very unpopular among the Sunnis
The results revealed:
1- There is a Sunni adherence to Hariri that reflects the state of confusion experienced by Sunni Muslims in Lebanon, worried about a political vacuum in the leadership of the sect
2- Mikati was able to popularly expand to Sunni areas beyond the northern borders, although he reiterates his unwillingness to engage in the experience of political expansion, and may not run for parliamentary elections, and is satisfied with supporting a list in the Tripoli constituency.
3- Future Movement l supporters do not like Baha Hariri to represent them , neither as a substitute for his brother nor as a participant with him in representing the Sunnis in Lebanon.
4- The majority of Saad Hari’s ” supporters did not support the assumption of any alternative to Hariri.
5- The Sunni majority showed enthusiasm about establishing a comprehensive Sunni political project to be managed by the Sunni prime ministers which is referred to as Heads of Governments Club
6-The Sunnis showed their regional bias mainly towards Saudi Arabia, while Turkey came in relatively second place.
7- The majority of Sunni respondents considered that the cause of the Lebanese crisis is the political behavior of the “Free Patriotic Movement” and “Hezbollah”.
8- Support for the “Islamic Groups” was absent.t?

A rally in support of former Prime Minister Saad Hariri arrived at the Center House, after it gathered on Tarek al Jadeedah Road, following the information about his reluctance to run for the upcoming parliamentary elections, according to a report by the Al-Nashra Lebanese news website

Al-Nashra also reported that it learned from informed sources that Hariri will announce that he will not run in the upcoming parliamentary elections, a decision that was also taken by Prime Minister Najib Mikati and former Prime Minister Tammam Salam. , who announced his reluctance to run, and it has not yet been decided whether former Prime Minister Fouad Siniora will do the same., more