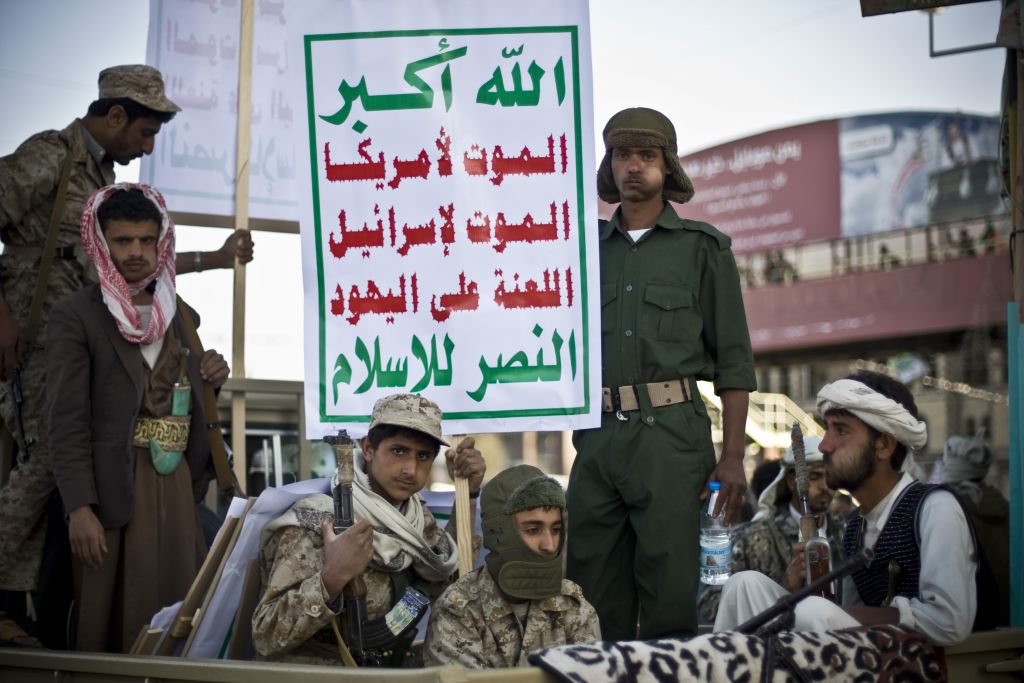 File photo of the Iran backed Houthi rebels : The Houthi flag ( center) does not seem to leave anything up to the imagination. Inspired by the popular slogan in Iran, “God is Great death to America, death to Israel” Curse the Jews and victory for Islam “
Share:

The Coalition to Restore Legitimacy in Yemen branded the media reports about it targeting a detention center in Saada as” false” and fabricated misinformation .

The Coalition’s Joint Forces Command will brief the Office for the Coordination of Humanitarian Affairs (OCHA) in Yemen and the International Committee of the Red Cross (ICRC) about the facts and details, Al Ekhbariya reported early on Saturday.

The Saudi-led coalition said it had launched the air strikes targeting the rebel-held capital Sanaa following the deadly attack against Abu Dhabi that killed three and was claimed by the rebels.

“In response to the threat and (out of) military necessity, air strikes have begun in Sanaa,” the official Saudi Press Agency said on Twitter, few hours after hours after the United Arab Emirates (UAE) vowed reprisals.

The UAE is part of a Saudi-led military coalition that supports Yemen‘s government against the Iran-backed Houthi rebels, who have repeatedly targeted Saudi Arabia with cross border strikes.

Two Indians and a Pakistani working for oil giant ADNOC died as three petrol tanks exploded near a storage facility, while a fire also ignited in a construction area at Abu Dhabi airport in the heart of the UAE, a renowned safe haven in the volatile Middle East.

The incident follows a surge in fighting in Yemen including advances by UAE-trained troops. The rebels also seized a UAE-flagged ship and its international crew earlier this month.