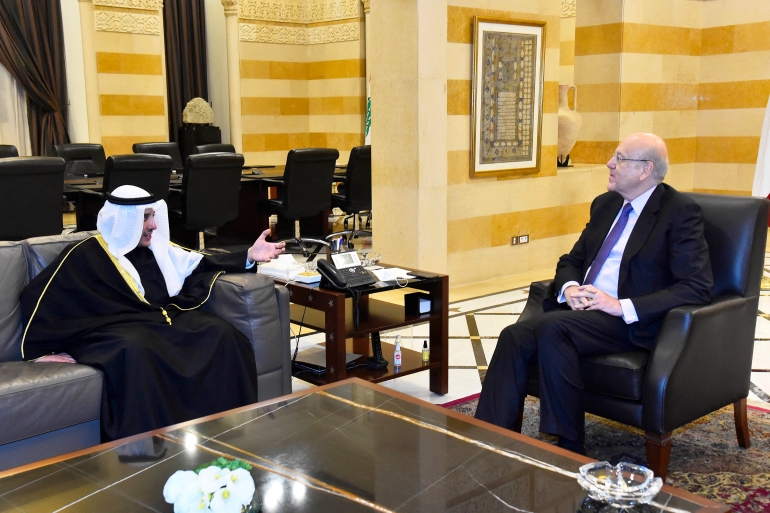 The Kuwaiti minister says Lebanon should not interfere in Gulf state affairs in order to improve relations. He is referring to Hezbollah , Iran’s proxy that has been known to interfere in the affairs of neighboring Arabian Gulf countries, specially , Kuwait, Bahrain , Saudi Arabia and the UAE, says his visit aims to rebuild trust with Lebanon

Beirut- Gulf Arab states are looking to mend a standoff with Lebanon, Kuwait’s foreign minister said during a visit, the first by a senior Gulf official since the spat erupted last year.

“This visit is one of various international efforts to restore trust with Lebanon,” Foreign Minister Sheikh Ahmed Nasser Al Mohammed Al Sabah said on Saturday after talks with Lebanese Prime Minister Najib Mikati at the start of a two-day trip.

“We are now taking steps towards building trust … which doesn’t happen overnight,” he told reporters, calling on Lebanese authorities to take “practical and concrete measures” that could bolster ties.

The minister said his visit was also to show solidarity with the Lebanese people, and that the move had been coordinated with other Gulf countries.

Kuwait recalled its ambassador from Beirut and also asked Beirut’s charge d’affaires to leave the emirate.

Lebanon “should avoid interfering in the internal affairs of Arab states generally, but especially in Gulf internal affairs, and it should not be a launching pad for verbal or actual attacks” if it hopes to improve ties, Sheikh Ahmed said.

The Kuwaiti official said he handed Mikati and his Lebanese counterpart Abdallah Bouhabib the demands and “now the brothers in Lebanon should study them and know how to deal with these matters and move ahead”. He refused to elaborate on what the demands are.

In the weeks that followed Kordahi’s resignation, tensions between Hezbollah and Saudi Arabia continued to rise. The crisis is rooted in Saudi Arabia’s uneasiness over the rising influence of Iran in the region, including in Lebanon, once a traditional Saudi ally and recipient of financial assistance from the oil-rich kingdom.

In late December, Saudi Arabia’s King Salman called on the Lebanese in a speech “to end the terrorist Hezbollah’s control” of Lebanon.

In early January, the leader of the Iran-backed Hezbollah, Hassan Nasrallah, launched a verbal attack against the kingdom, accusing Riyadh of spreading “extremist Islamic ideology”.

The Gulf dispute had exacerbated an already dire economic situation in Lebanon, which is in the grip of a financial crisis branded by the World Bank as one of the planet’s worst in modern times.

More than 300,000 Lebanese live in Gulf Arab states, providing a key economic lifeline, according to the Gulf Labour Markets and Migration think-tank.

Lebanese governments have long declared an official policy of dissociation from wars in the Middle East, even as Hezbollah has become involved in regional conflicts, deploying fighters to Syria to help President Bashar al-Assad.

Sheikh Ahmed said dissociation must be “in word and deed”

On Sunday, he is expected to meet President Michel Aoun and Parliament Speaker Nabih Berri, both political allies of Hezbollah.

Aoun and Mikati have called for dialogue with Saudi Arabia to resolve the diplomatic crisis.