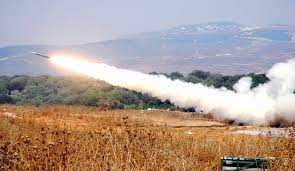 A rocket was launched towards Israel on Wednesday night, according to Lebanese media.

Israeli media reported that the Israeli army is investigating the matter

Al markazieh reported that an explosion was heard in the Wadi Al-Aziya area, located between the municipality of Zebqin and Al-Hanya, south of Tyre in south Lebanon , the causes of which were not known.

The report added that witnesses reported that unidentified persons fired a missile, toward Israel Wednesday evening from that area

While no information has yet been released by any Lebanese security authority explaining the nature of the explosion, Israeli army sources revealed that no missile was found in Israel that was launched from Lebanon

They told the ” New Press” that the Israeli army says it is possible that the missile fell into the sea.

This development comes a day after Israel said on Tuesday that it successfully tested a system designed to intercept ballistic missiles outside the earth’s atmosphere.

The Arrow Weapon System is part of an array of missile defenses Israel has developed in recent years to protect itself in any future conflict with archenemy Iran or regional militant groups, such as Hezbollah

The Defense Ministry said the system detected the target and fired two Arrow 3 interceptors at it, calling the mission a success.

The system was developed by Israel Aerospace Industries, a state-run defense firm, in cooperation with the U.S. Missile Defense Agency.

According to Ali Hussein, a Lebanese analyst , even though no one claimed responsibility for the launch , Lebanon’s heavily armed Hezbollah militant group which is the only militia in Lebanon may have tried to test the new Israeli intercepter .

Founded in 1982 by the Quds force of Iran’s Revolutionary Guards and classified by the United States and other Western countries as a terrorist organization, Hezbollah (Party of God) is the most powerful group in Lebanon because of a heavily armed militia that fought several wars with Israel. It grew stronger after joining the war in Syria in 2012 in support of its dictator Bashar al-Assad.

Hezbollah’s arsenal has been a big point of contention. The group says its arms are needed to deter Israel , while Its opponents say the group undermines the state, taking decisions on war and peace that affect the entire nation.

Hezbollah has been designated a terrorist organisation by the United States, Canada, Germany, Britain, Argentina , Honduras as well as the U.S.-allied, mainly the Gulf Cooperation Council, which includes Saudi Arabia, the United Arab Emirates, Bahrain and Kuwait, Qatar and Oman. . The European Union classifies Hezbollah’s military wing as a terrorist group.

Since May 2000 when Israel withdrew from south Lebanon Hezbollah has been using its arms to gain more influence in the country. It now controls all the branches of government including the presidency through its ally president Michel Aoun and the parliament through its ally Shiite Amal leader Speaker Nabih Berri and for past 3 months Hezbollah prevented the cabinet from holding any meetings unless Judge Tarek Bitar who is investigating the massive 2020 port explosion is fired .

Most Lebanese now consider their country as a colony of Iran.