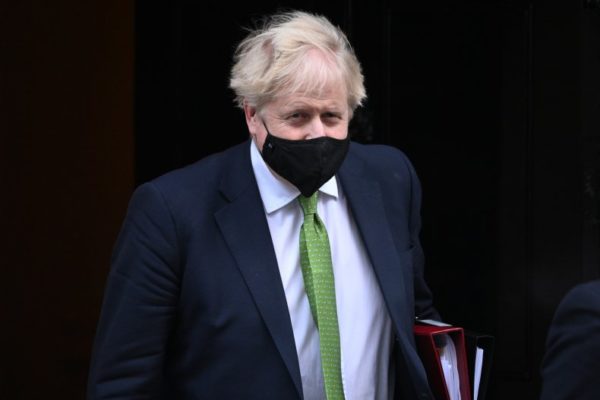 British Prime Minister Boris Johnson faced MPs in the House Of Commons on Wednesday as speculation over a vote of no confidence in his leadership mounts. Above, Johnson leaves 10 Downing Street on January 19, 2022, in London. PHOTO BY LEON NEAL/GETTY IMAGES
Share:

After the revelation that Johnson had attended several parties in Downing Street in mid-to late 2020, when COVID-19 pandemic lockdowns were only just picking up, he faces not only public backlash but potentially an ousting from his own Conservative Party.

Johnson said he did not know that a May 20, 2020, gathering was against COVID-19 rules, Reuters reported. Conservative Party lawmaker David Davis said: “I expect my leaders to shoulder the responsibility for the actions they take.”

At the Wednesday meeting in the House of Commons, Davis repeated a quote to Johnson from Conservative Leo Amery to former Prime Minister Neville Chamberlain regarding his handling of World War II in 1940: “You have sat there too long for the good you have done. In the name of God, go.”

Though the next prime minister election is not until 2024, Johnson faces the possibility of being voted out of power by his own party, which has a history of ousting its leaders when they prove to be “liabilities,” according to the Associated Press.

To trigger a vote of no confidence, 54 of the 360 Conservative members of Parliament—or 15 percent—would have to write letters requesting it to the party’s 1922 Committee chairman. If the party were to vote to replace Johnson as leader, whoever is voted in his place would also become prime minister.

The Guardian reported that Johnson would challenge a no-confidence vote should it occur. According to Reuters,about 20 lawmakers said they plan to submit no-confidence letters and several more already have. An analysis from The Times showed 58 Conservative members of parliament have openly criticized Johnson. If all of them submitted letters in favor of a no-confidence vote, it would go forward.

Another strain on Johnson’s party is Member of Parliament Christian Wakeford, who recently defected to the Labour Party.

Wakeford wrote to Johnson that he defected because Britain needs “a government that upholds the highest standards of integrity and probity in public life and sadly both you and the Conservative Party as a whole have shown themselves incapable of offering the leadership and government this country deserves,” according to the BBC.

At the Wednesday hearing, Johnson defended his government, citing its COVID-19 booster rollout—calling it the fastest in Europe—and its refusal to shut down for the holidays.

When asked directly whether he plans to resign, Johnson said, “no,” according to Reuters.